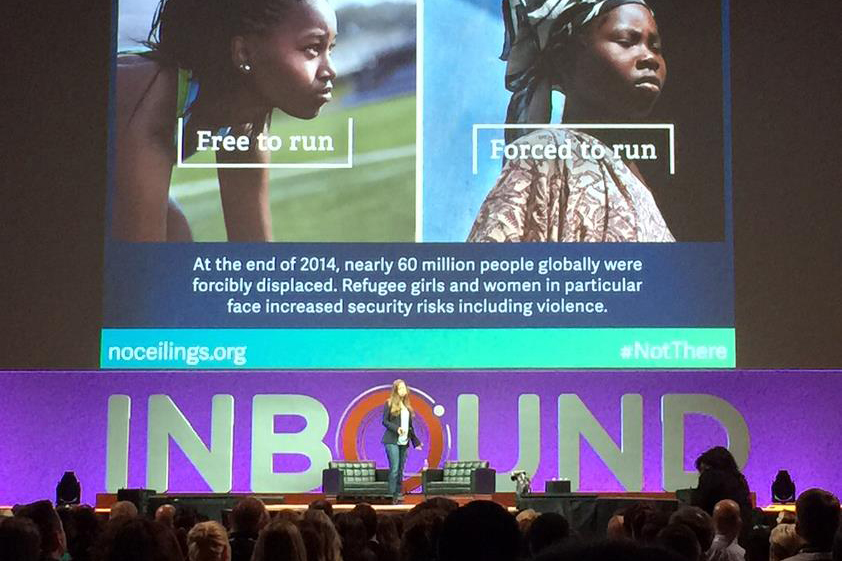 INBOUND 2015, a marketing and sales conference hosted by HubSpot, was held in Boston from Tuesday, September 8 to Friday, September 11. INBOUND gets its name from the term “inbound marketing,” an approach that focuses on reaching people and prospects in an authentic way. The conference played upon that “inbound philosophy,” and focused on the importance of the human experience as a way to connect people naturally.

The week was also jammed packed with bold talks and mini-workshops on a wide range of topics from the socially conscious (domestic violence awareness and sexual violence prevention) to business-related topics such as social media strategies.

It was especially impressive that two out of the four keynote speakers were female, and that the conference emphasized themes and topics important to women. The two female keynote speakers reinforced that connection.

Brené Brown, a research professor and author of several New York Times bestsellers, including Daring Greatly, How the Courage to Be Vulnerable Transforms the Way We Live, and The Gifts of Imperfection (to name a few) gave the keynote on Wednesday to a overflowing auditorium.  She is well known for her TED Talk, The Power of Vulnerability, which received over fourteen million views, ranking it in the top five.  Although she has a huge following of both men and women, her talk seemed to especially strike a chord with the female audience, as she shared her own personal experiences related to being a woman, mother, and wife.

She encouraged people to “show up in life” by being courageous and open to vulnerability. She talked about problems that occur both in the workplace and in personal relationships that stem from the “old stories, messages, and baggage” that we carry around with us. She noted that the negative self-talk becomes a constant reminder of our flaws and failures, and can lead to communication breakdowns and relationship issues.

Brené’s talk was honest and open. She shared personal stories about her own internal struggles and the importance of embracing vulnerability: by accepting vulnerability, she said, we are able to be kinder to ourselves, and create deeper connections with others.

“Be bold, be courageous, and be honest with yourself.  Playing it safe is not really living.” – Brené Brown

Chelsea Clinton delivered the final keynote. She hit upon serious issues relating to women such as the refugee crisis, violence, income gaps, and the lack of access to healthcare.  Through her position as Vice Chair of the Clinton Foundation, she has become a powerful voice for women.

She talked candidly about the refugee crisis and how it has caused an increase in violence against women: “We have the largest refugee crisis ever, even more than that after World War II,” said Clinton. “The rates of violence and depravation go up for women, especially refugees.”

She threw out some disturbing statistics about gender-based violence in the world: one in three  women worldwide has been sexually assaulted. This not only hurts women, but also has a negative impact on the economy, as women are not able to hold down jobs, contribute to society, and can have more health and mental health problems as a result of this type of trauma.

Lack of healthcare is also a huge issue that negatively impacts women: “800 women die every day because of healthcare challenges and lack of medical treatments,” Clinton pointed out.

Becoming a mother to her daughter Charlotte made Clinton an even stronger advocate for social change. “It’s important to create a space for kids to voice what they care about,” said Clinton.  To that end, she authored the book It’s Your World:  Get Informed, Get Inspired & Get Going, a book for kids ages 10-14 that explores the challenges facing youth today, and gives examples of young people who are taking action to make positive changes in their communities.

Beyond the keynote speakers, there were other impressive women who hosted breakout sessions:

LaShawne Holland  , CEO of LaShawne Holland International, hosted a session called Money Made Easy. LaShawne grew up in poverty, became a teen mom, and ultimately became the first person in her family to attend college.  Through her journey, LaShawne came to realize that women tend not to talk about money, and are often intimidated by the topic of finances.

To counter that, she is now a “global wealth activator,” and her mission is to empower women to take control of their finances.  She shared with the audience real-life examples of how every person can set out on the road to financial independence.

Lisa Genova, Neuroscientist and author of Still Alice, the book-turned-film that won Julianne Moore and Oscar, talked about her personal journey toward becoming an writer. After going through a divorce, she took time off from her work as a neuroscientist to spend more time with her daughter. She ended up being out of work for three years, and found that her carefully plotted life totally unraveled. Lisa was stifled by fear until she had an epiphany: she needed to create the life she wanted by being more daring and curious.

She asked herself the question, “If I could do anything I wanted, and if I didn’t have to care about what people thought of me, what would that be?” The answer came from her heart – to write the book that she’d always wanted to. Negative messages from others and her own self-doubt almost took over, but she started writing and completed Still Alice, her first novel.

The journey toward publishing her book was bumpy. She sent over one hundred letters to agents trying to get her book published and heard back from no one. At that point, she decided to self-publish and sold copies from the trunk of her car. She used inbound marketing channels like her website and social media accounts to spread the word, which eventually led to a connection at Simon and Schuster. They published the book, it became a movie…and the rest is history. Her advice for the audience? “Be comfortable being uncomfortable!”