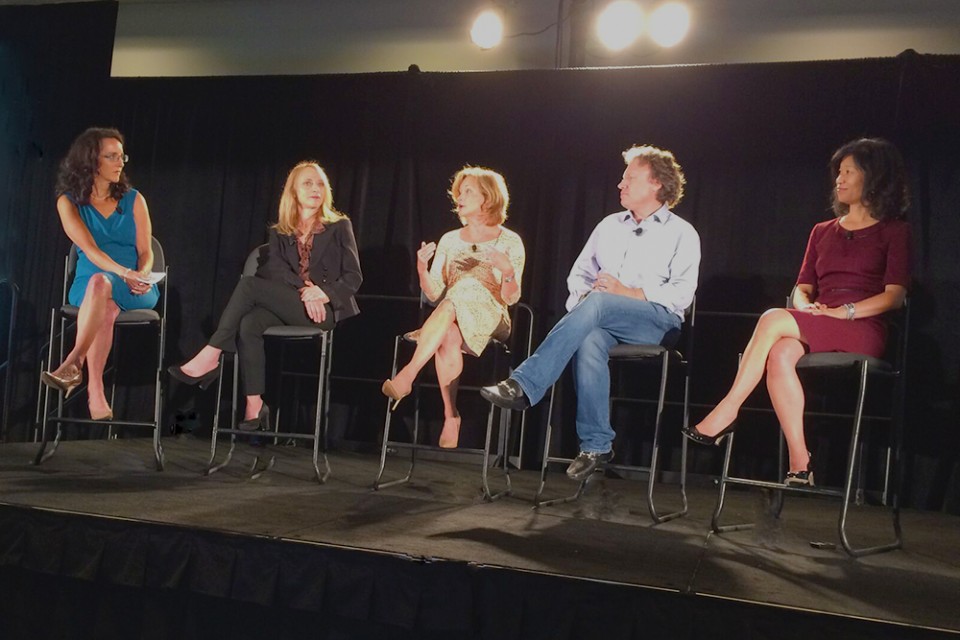 Unconscious Bias at the Office

VMWomen (and One Man!) Take On the Topic of Workplace Bias — and How to Remedy It

First, one quick career tip emerged during this panel: write shorter emails. One of the participants at this event posited that leaders write concisely, while verbose emails and apologies convey less confidence.

Having taken care of that pointer, on to the substance of the event: This was the sixth annual VMwomen event, and IT innovators have been gathering at VMworld, the leading virtualization technology conference, for twice as long.   And this year, the VMwomen panel at VMworld 2015 focused on the concept of unconscious gender bias. Why? Because technology — specifically engineering — is traditionally a male-dominated profession, although this is changing each year as companies promote awareness. In 2013, women made up 26% of the computing workforce (more stats on women in tech here).

Lori MacKenzie, Executive Director at Stanford’s Clayman Institute on Gender Research, introduced the concept of unconscious bias to the audience by describing the impact of “blind auditions” on orchestra musicians. (A blind audition is where candidates play behind a screen, so that judges cannot determine gender, and have to focus only on musical performance.) Four decades ago, the top orchestras had less than five percent of female musicians. After the introduction of blind auditions, this population increased fivefold.

Another similar study in unconscious bias, more relevant to traditional workplaces, is that of gender bias during resumé screening. When given an identical resumé to evaluate, 79% of a panel deemed the male’s resumé worthy of hire — vs. 49% for the same resumé when submitted with a female name.

What can we do with all of this sobering information? Awareness, of course, is the first step, as it is when tackling any issue. The other high-level calls to action are as follows:

Following Lori’s presentation, Robin Matlock, CMO of VMware, moderated a panel discussion. I also caught up with Lori and Sheryl afterwards.  Here is a list of the players in the discussion below:

What does it mean to be inclusive, as a leader?Paul Strong: There is a vast amount of data that shows the value of diversity. As the CTO of a tech company, I realize that our business is innovation. The data shows very strongly that innovation correlates very tightly with diversity, in terms of gender, experience, ideas, skill sets, and expertise. So the worst thing you can possibly have at an innovative company is “monoculture.”Renee Zaugg: Inclusive leadership has to be intentional and purposeful. We need to demonstrate it as leaders every day in our interactions, and actually challenge people on it — for example, bringing up gender parity and pay during the employee merit process.

What do we need to do to more specifically tackle rules in the workplace?Lori MacKenzie: We talked a bit about the “likeability penalty,” but what we often don’t know when we enter a company is that expectations will shift as we advance in our careers. One of the best things that companies can do therefore is to coach women not just to succeed in today’s job, but also focus on where the job is going. For example, managers can have a criteria review to evaluate questions like “Did we penalize her for her personality traits along the way?”

What specific actions can we take as leaders?Sheryl Chamberlain: My door is open to anyone to help them get to the next level. If I’m not available, that means I can’t pay it forward — and it’s all about paying it forward!R. Zaugg: Sponsorship is really important.  When I started sponsoring women, I realized I was talking about their capabilities — but since then I’m quickly changing the conversation to focus on results, business, financials, and numbers.  That’s what makes people in business pay attention.

Do you have a specific trait that you think has made you a successful leader?S. Chamberlain: The first thing I learned in my skillset was that when I ask open-ended questions, I can learn from others and build relationships. I’ve also always taken jobs that are not necessarily for the skills I specifically have — by just simply going and doing them. Also, it’s important to let other people know that their ideas count, and that you are connected to their ideas; you can be part of that success in your acknowledgement of it.

Have you ever encountered any sort of male aggression or challenge, and how did you handle yourself?L. Mackenzie: I’ve been in meetings where I’ve been ignored, and it was totally unconscious; I think the person was just used to having people listen to him. We women always take it personally, but once we realize there are some patterns, we just have to learn to interrupt them. In that particular situation, I wish I had just made one point. I was trying to make so many points it was hard to interject!