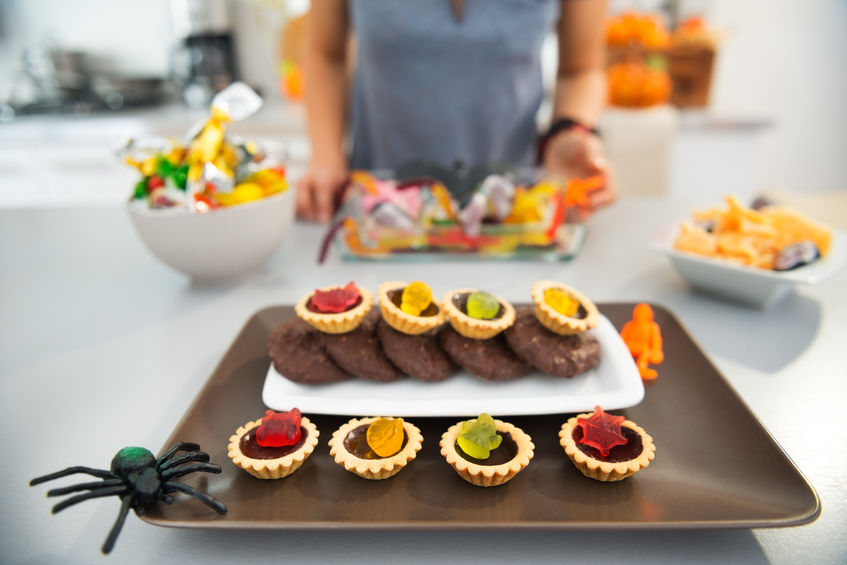 12 Treats to Trick Your Diet This Halloween

Let’s face it, candy is candy, which means, unless you’re handing out apples this Halloween, you’re going to have a bowl (or bags) full of sugary calories in your house and likely sitting on your desk or a nearby desk at work. In addition to adding an extra mile or two to your morning run, there are a few candy options that are considered slightly healthier than others, so we’re pulled together a list of our favorite – kind of, sort of – healthy options to look for in the candy bowl.

Gummy BearsGummy bears originated in Germany by the Haribo company in 1967. And like other candies, gummy bears are loaded with sugar, but gummy bears, worms, and other chewy creatures (Dots, Swedish Fish) are fat free and typically lower in calories than chocolate alternatives in the candy bowl.  They also contain a small amount of protein because of their gelatin content. Try to look for brands that are made with real fruit juice.

SmartiesManufactured in New Jersey by an English immigrant in 1949, these retro treats will likely be in most Halloween candy bowls and with only 25 calories for an entire roll, they’re a good choice for a quick sugar splurge. But be careful not to eat too many of these rolls of sugar, it’s easy to get carried away with these little treats.

Jolly RanchersIf you like fruity flavors, try digging through the candy bowl to find a Jolly Rancher to suck on to put your candy urge at bay. At 23 calories, unfortunately, they’re still full of sugar, but since they’re a hard candy, they will likely last longer than chewy candies… which means you will actually eat less of them.

TwizzlersThe manufacturers of this licorice candy, Cherry Twizzlers, is one of the oldest confectionery firms in the United States, established in 1845 in Lancaster, Pennsylvania. It’s known as a low-fat treat for many movie-goers, and the snack-size version during Halloween is even more regret-free.

Tootsie RollsFounded by an Austrian immigrant in New York City in 1896, and named after his daughter “Tootsie”, these little treats were created as a chocolate-tasting alternative to traditional chocolates that would not melt in the heat.  And since they’re artificial chocolate, three mini rolls contain only 70 calories and 1.5 grams of fat.

RaisinetsChocolate-covered anything is delicious, but during Halloween, small packets of chocolate covered raisins are sure to be an option in the grocery store for your candy bowl. This chocolate and raisin combo has only 67 calories and less than 3 grams of fat per snack-size bag (about 42 pieces). But of course, proceed with caution, although real fruit, they are still covered with chocolate, so keep your serving size to just one pack.

York Peppermint PattiesFirst produced in York, Pennsylvania in 1940, these little dark chocolate, peppermint snacks have just 140 calories each and only 2.5 grams of fat. The small size offered during Halloween are a great option for a quick chocolate fix without overindulging and they’re covered in dark chocolate for an added health bonus.

MoundsDark chocolate stuffed with shredded coconut… That doesn’t sound too unhealthy, right? The coconut-filled Mounds chocolate minis are relatively low in calories and fat compared to other options in the mini candy bar bag, and its sibling the Almond Joy, which has almonds in it.

M & M’sThese famous button-shaped chocolates with bright colored candy shells are sure to be a favorite in the candy bowl and a delicious option to satisfy your sweet tooth with 34 calories and 1.5 grams of fat per 10 pieces. Stick with the plain M&M’s and not the peanut or peanut butter delights.

Three MusketeersThis chocolate-covered fluffy whipped chocolate bar is known as a “light” chocolate bar, with it even being promoted in its commercials as floating into air due to its lightness… Fortunately, with 24 calories and .7 grams of fat per mini, these fluffy treats are light enough to snack on with limited guilt. Go ahead and splurge on a few!

Kit Kat BarsThese chocolate-covered wafer biscuit bars originated in the 1930’s in the United Kingdom.  Make sure to sing their well-known jingle “Gimme a break, gimme a break…” when you ask for one out of the candy bowl. One package of kit kat mini’s (two mini pieces) has 70 calories, 4 grams of fat.