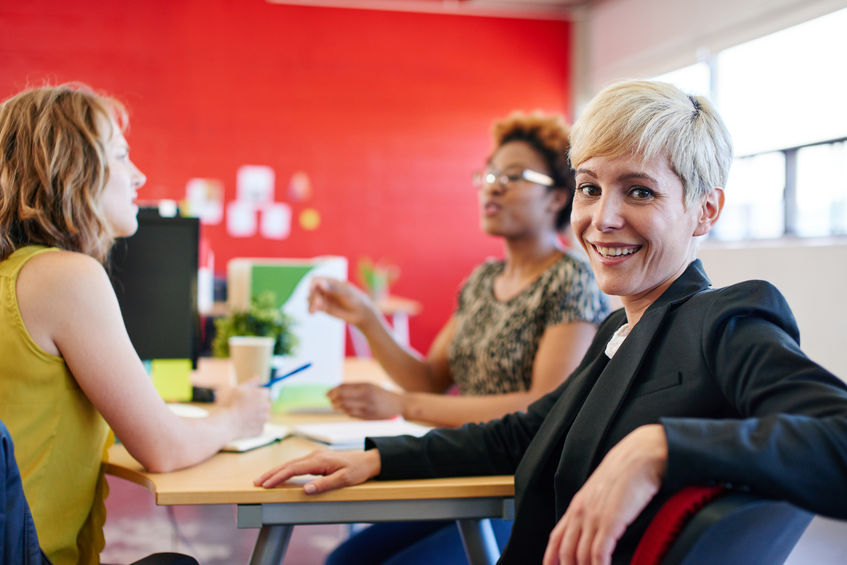 Women in the Workplace

Every year, the SXSW Interactive Festival brings together professionals from across diverse industries to converge upon Austin and share brilliant ideas with one another. This year’s Work and Career track included several sessions geared towards women that emphasized how to achieve better gender equality and increase female strength thru specific actions: changing their own mindsets about issues they have taken for granted, speaking up, and creating actionable plans to maintain successful careers amidst life changes.

In the session, “Superwomen Anonymous: Cut Your Cape and Live!” speaker Ber-henda Williams led a room full of women through an empowering session, telling attendees to play to their individual strengths and overcome the mindset of competition with other women. “Collaboration over competition” was the emphasis of this lesson. “Your gifts make room for yourself,” she said. Above all, she emphasized that in order to change the status quo, women must work inwards out.

Ber-henda made the point that in order to be successful in career and life, women must make time for their own self-care and be more conscientious about those with whom they choose to spend time.  Get rid of the Superwoman mindset, she said, and take some time alone (at least twenty minutes a week) to recharge and revitalize.

Also, during the session, attendees participated in discussions about what each other’s idea of success was and what each woman could do to improve upon her own self-care. Many reported feeling uplifted and ready to make changes upon completing Ber-henda’s session.

Another aspect of changing the status quo is giving working mothers more tools to maintain the momentum in their careers: in the session, “Motherhood to Manager: Keeping Career After Baby”, speaker Judith Bitterli taught attendees how to be proactive with their own stints of taking time away from the office following the birth of a child. She told the crowd to speak up, be bold, and make proposals leading up to maternity leave and post-maternity leave, noting that the only way to continue a successful career, even with a child on the way, is to make detailed plans and to communicate clearly with co-workers and employees about expectations on both ends. Ideally, she said, women must create their pre-maternity leave and post-maternity leave plans one year in advance to prepare their colleagues and employees for their hiatus.

Judith recommended the following guidelines for both expecting mothers and their partners:

Judith also noted, “The gender gap is very real: it may take us five generations to reach [gender] parity unless we do something now”. Three ways women can work on alleviating the gender gap:

Judith also pointed out how women unconsciously use words and mannerisms that hurt the cause for gender equality.  The following unconscious bias communication traps/phrases are common among women:

These communication traps and others make women sound powerless. Women can avoid or recover from using these phrases by working on self-confidence and speaking with more certainty as they communicate with other women and also male colleagues.

Judith finished the session by asking the audience, “What is the legacy you want to leave behind for your children?”  Attendees mulled this over as they then worked on self-assessments regarding their individual strengths, weaknesses, opportunities and threats (also known as a personal SWOT analysis).

Of course, it is not all entirely up to women to change the status quo: in the session, “Take No Sh*t: Thrive as an XX in an XY World,” panelists discussed how there has been a societal wave of lower standards and valued discourse between men and women in the professional world, especially in the realm of technology.  Sara Spivey, CMO of Bazaarvoice, said that at the beginning of her career thirty years ago, she never felt discriminated against from her male colleagues. However, she stated during the panel, “There has been a breakdown of gentleman-like behavior in the professional world.” So, in order to encourage gender equality and better treatment between men and women in companies, the dialogue must be reframed: managers must say “NO” to homogeneous teams and encourage female employees to seek out management positions.

Men’s attitudes towards women also need to shift from thinking that women can’t do a “man’s job” as a leader. The idea was that if women want change, they must make it a priority: enlist male colleagues and leaders to be allies along the way, to truly instigate change at companies and in the professional world as a whole.

Overall, women attending SXSW Interactive 2016 had a bounty of opportunities to learn how to further their own careers, whether they are entrepreneurs or working corporate jobs. With these lessons from the great speakers at the event, women can continue to make further strides in the professional world and achieve gender equality sooner than later.