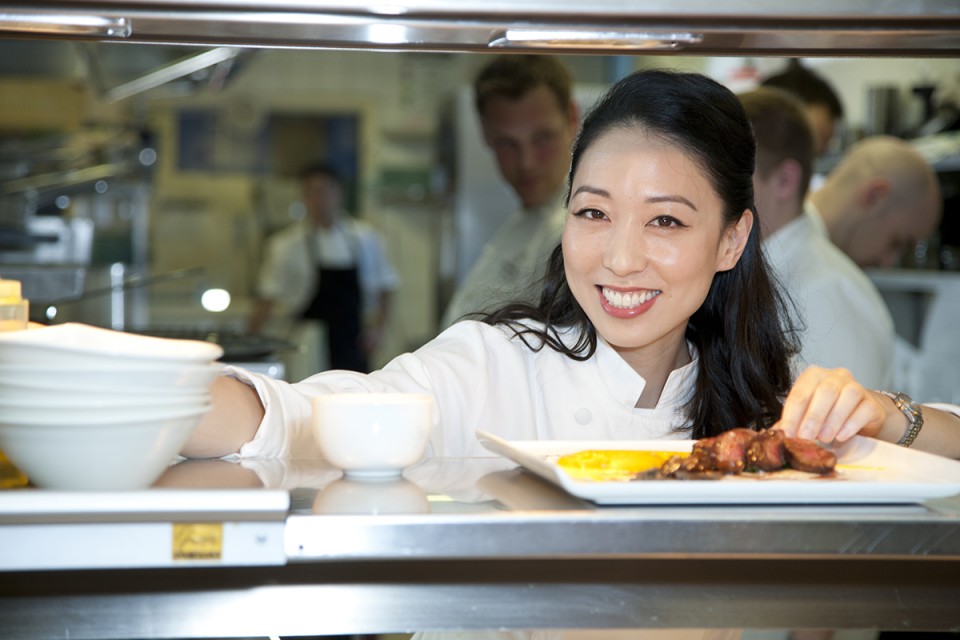 Visualize three female chefs: one is a European, farm-fresh devotee, another a sensationally southern-and-seasoned barbeque expert, and the last an American ambassador for the cuisine of her Far East lineage, simplifying fiery Korean dishes via cookbooks and in the two restaurants she owns across the globe.

Three talented culinary artists, from three corners of the world, who are also celebrities: Ana Roš stars in the Netflix docuseries Chef’s Table; Melissa Cookston is a World Champion BBQ Pitmaster, author, and judge on the reality series BBQ Pitmasters; and ex-financial analyst (and Morgan Stanley alum!) Judy Joo is the “Chef Patron” at Junjuu, the Korean restaurant she opened in both London and Hong Kong, and a star of the TV show Iron Chef U.K.

Didn’t think being a chef was possibly that exciting or riveting? In a funny way, you might be right, since, as these chefs can attest, as soon as the bright lights fade and the cameras stop rolling, they are just like the everyday entrepreneur, spending every available moment perfecting their craft.

That said, do professional chefs really spend all their waking time in the kitchen experimenting with flavors to bring their audience yet another twist on their original, delicious dishes? We as eager foodies can only hope so, while making pilgrimages to their signature restaurants, setting our DVR’s to record the new season of their hit shows, and pre-ordering their cookbooks before they even release a title for them.

Each chef starts their journey with humble beginnings in their respective kitchens. But little do they know then that their culinary quests may lead them to participate in competitions, much less be on TV shows. So, how does it all come about? What makes their stories so unique? For Chef Ana Roš, from Slovenia, it was her family and her country’s inspiration.

She recalls: “At the beginning I was completely self-trained, playing on my talent of combining tastes and on what my mother-in-law was able to transfer: the knowledge of bread, meat, simple and basic desserts, pastas.  After a few years I had a chance to work with, and become friends with, some world-famous chefs, and some of them gave me the best possible bases for my cuisine.”

You can almost hear Roš’ Slovenian accent as she paints a vivid picture of her daily routine in pursuit of serving the freshest ingredients in the family restaurant Hiša Franko, located in Kobarid, a town known for having the best restaurants in Slovenia, as well as fascinating archeological sites dating back to the Iron  Age.

On the restaurant’s website, Roš shares her impressions of the area: “If I look out our Mediterranean terrace overlooking the Adriatic Sea, I can spot the coast from Croatia to Venice. On a beautiful day, the sea shines golden and I can count the boats in the Trieste bay. Just a bit further on, there is a kingdom of Irena Fonda and her sea bass. The salty flavor of oysters awake the memories of my childhood, bringing back the nostalgic taste of truffles and wild asparagus!” It is evident from the evocative way she describes the nature-heavy influence of her locale that the freshest elements are prized in her cooking.

Chef Ana says she also approaches her kitchen in a technical, almost scientific way as she uses herbs and spices from her own garden to infuse the element of surprise which, for her, is in the texture. “Raw is my favorite, but the element of surprise is essential using different textures (cold/warm, soft/hard) or contrasting tastes (bitter/sour and sweet/salty).”

While Ana enthuses about her passion for cooking, she acknowledges it wasn’t the easiest transition to stardom as she began her family, having two children within two years. “Yes, pregnancy is a big obstacle, as well as having two little babies and later two small children,” Ana said. “You need to organize your time very well. I still run, climb, do yoga and play volleyball. I also read a lot.”

To Ana, every single day is a challenge and she has a simple motto: believe in what you do.

“Before the two children were born, we [she and her husband] used our freedom to travel a lot all around the world to see and understand the best kitchens in the world. Then I practically closed myself off in my kitchen, working hard on techniques and flavors, studying from many books I have (traditional and modern), and trying to understand my own way.”

After participating in Cook it Raw, an environmentally-based culinary project, she was then approached by the producers of the Netflix original documentary, Chef’s Table. “In September 2015, we shot the Netflix Chef’s Table episode, which was a great honor, since I was selected first out of twelve world chefs,” Roŝ explained.

For more about this Slovenian culinary master, scope out this article in the well-respected culinary magazine Saveur (where, coincidentally, Judy Joo worked before her career as a chef!), and read about how Roš has revolutionized her country’s cooking.

Melissa Cookston: A BBQ Expert — with the Titles to Prove It

For Melissa Cookston, it’s the competition side of things that heats up the grill and gets her going.  BBQ Pitmaster Cookston is the only female barbeque world champion and the “Winningest Woman in Barbecue.” One of Chef Melissa’s proudest moments was in 2010 when she won her first World Barbeque Championship.

“It was a culmination of all the blood sweat and tears,” Melissa said. “I had a Sally Field moment — you like me, you really like me!”  She is now known as “the most decorated woman in competitive barbecue,” as this Wall Street Journal article attests.

Lighthearted Chef Melissa has always been in the restaurant business, starting with making milkshakes at thirteen years old.  She is self-taught, from the obligatory school of hard knocks, with a competitive side that earned her not just one, not two or three, but four world barbeque championships, giving rise to her title as one of “America’s Most Influential BBQ Pitmasters and Personalities” as bestowed by Fox News in 2015.  She is now Pitmaster at the Memphis Barbecue Company restaurant.

“My husband introduced me into the competition barbeque world twenty years ago where I found a passion for food,” Melissa said. And two decades later, what are the go-to tools for a world champion barbeque chef? For her, a food processor is important, but not a must. “You can do a lot of things in a blender! I also have to have a cast-iron skillet, and a Jaccard meat maximizer tenderizer.”

As for her approach to the work she loves, and being a female BBQ champion, she says: “I never looked at myself as different. My work ethic and drive speaks for itself. For me, I just want to be the best in barbecue, not the best female chef. I grew up in the Mississippi Delta where blues music was born. The artwork is so vibrant, so I wanted to emulate that and put my flavor over the top.”

Melissa just released her second cookbook, Smokin’ Hot in the South: New Grilling Recipes from the Winningest Woman in Barbecue this past May, and also served as a judge on season four of BBQ Pitmasters: Destination America.

Unlike Melissa and Ana’s humble beginnings, New Jersey-born Chef Judy Joo spent years as a successful analyst at Morgan Stanley before deciding to pursue her true passion, and enrolling at the French Culinary Institute. After that, she worked in both the editorial department and test kitchens at Saveur magazine and at Slow Food USA, the organization known for its devotion to fresh, unprocessed ingredients.

“I have always loved food— cooking, restaurants, and eating! I love the science aspect of cooking as well; I have an engineering degree, and the kitchen is akin to a laboratory,” said Judy.

After culinary training, Judy spent two years working in the Gordon Ramsay empire, working at five of his London restaurants, then competed in and won the U.K. version of Iron Chef, becoming one of four chefs to hold the title.  Now, as the current host of the second season of the Cooking Channel’s Korean Food Made Simple, Judy has become a culinary ambassador for Korean cuisine.

She focuses heavily on using ingredients with inventive flair; for instance, dropping sundried tomatoes into omelets. “It really adds a lot of flavor and umami,” said Joo. “I also add a drizzle of aged balsamic into spaghetti sauce to add some depth.” Other tips from the Korean master chef: “Add a few cardamom seeds when you brew your next pot of coffee for a gorgeous fragrant cuppa!”

As for her favorite kitchen gadgets, Judy utilizes a Micro plane, chef’s knife, Vitamix and kitchen shears. An insider tip: “You can live without any of those gadgets that make ‘slicing’ easier for one specific item, like those weird banana slicers!” said Judy.

Now owner of two successful restaurants in far-flung locations, Judy launched her first cookbook, Korean Food Made Simple  in May 2016.  Some final smarts from this international culinary star? “It’s hard to have a good work/life balance, but it is achievable if you make time off a priority. Treat going to the gym as an appointment with your most important client: you!”