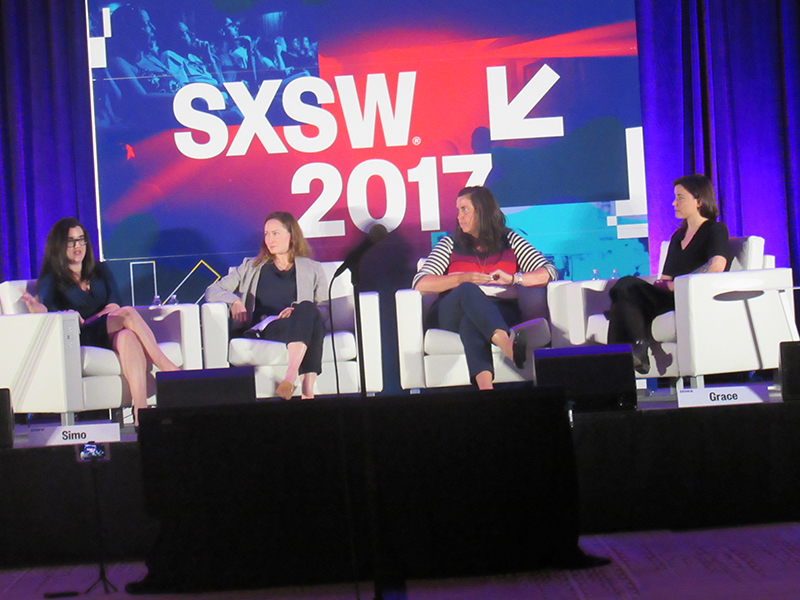 5 Lessons from Women in Tech

An Overview of the SXSW Panel “Product Mavericks: Top Tips from Women Who Build”

On a stage in the JW Marriot hotel during the 2017 SXSW Interactive festival, representatives of four of the biggest names in tech took the stage: Facebook, Lyft, Slack, and Google. The session was nearly filled to capacity, badge-holders hoping to glean some kernel of knowledge that they could bring back to their own companies as they listened to the session “Product Mavericks: Top Tips from Women Who Build.”

In many businesses, data is king. And it’s true–to determine everything from proper ROI to emerging trends, you want to consult your data. Data can tell a story, but it’s necessary to supplement that data with an informed opinion on whether it’s telling the correct story. To do that, you need to talk directly to your users.

Intuition is a major part of telling the correct story–and, according to Rapaport, you must “leverage data-driven with intuition.” By taking both into account when making business decisions, you have a clear view of how those decisions will affect your bottom line. Hannon added that when building a team, it’s important to “put them in the field early on to develop that intuition.”

Rapaport said that Lyft initially went into the field to ask users what they wanted. Back then, the rideshare space was brand new, and they had to develop intuition with nothing to base it on. “If we hadn’t gone into the field, we wouldn’t have that experience and background,” she said of the research.

Little Things Can Be the Differentiator

When a business is brand new, the focus is on the big items. Interface, function, usability– everything to make the product functional enough to get it out the door before someone beats you to it. However, once you’re established, it’s no longer a race to get to the space first; it’s who does it better.

“Upon launch [of a new product] we have only a few engineers,” said Simo. “We realize early on if the product is going to be successful, and [we] add more engineers as we need them.” This reflects the culture of change at Facebook, where teams are given ownership of a problem to solve, rather than a product, which keeps them invested longer.

Hannon recalled her work on Hillary Clinton’s Fact Checker during the first presidential debate. While their website was by no means the only fact checker, or even the most detailed, they focused on having the capacity for the expected huge influx of visitors. Other fact checkers did not and, in the end, Clinton’s fact checker website was the only one that didn’t crash during the debate. In that case, they estimated that resilience would be more valuable than actual product, and they were right.

When asked about failure, Hannon sighed dramatically and simply said “Google Wave … ” and the crowd laughed. Google Wave was Google’s attempt at real-time collaborative editing, whose 18-month lifespan (before being absorbed into aspects of Google Docs) was known throughout the tech world as an epic failure. Hannon described the downfall of Wave as “trying to do too much–be platform, product, and protocol.” Despite the failure of the product, Hannon said she is grateful for the experience and the lessons she learned.

But failure isn’t necessary bad. Hannon even suggested that failure early on can make for a stronger career later. By facing failure head on, putting yourself in scary situations, and “getting through it,” you ultimately become a better problem solver with even more knowledge of your product and industry. And never be afraid to ask questions. “You have to say what you don’t know,” she added. “People will respect you for it.”

Know How Powerful You Are

“I’ve never met a woman who thought she was more powerful than she is,” said Simo. Grace added that “you’re your own worst enemy.” All the women agreed that confidence comes with accepting the power that you have in any situation.

Simo shared an anecdote about an early experience leading a project. She had insisted that her boss be in meetings with her, even when she was running the entire meeting herself. When her boss asked why he needed to be present, she said it was because she didn’t want to say something stupid. He replied, “When’s the last time you did?” It was a game-changing moment that helped Simo continue with confidence.

Grace reminded the audience that “CEOs are real people” and to not be afraid of “managing up,” a concept that might seem foreign to some. She stressed that transparency should go both ways, from the bottom and the top.

Simo admitted she recently ran an entire meeting while flat on her back on bedrest during her last pregnancy. Which brings us to our next lesson …

Figure Out the One Thing You Need for Balance

When asked “How do you balance a family with a career?” the women spoke to the broader idea of “How do you balance your personal and professional lives?” The overwhelming response was to “find your one thing [outside of work].” For Simo, it was painting.

Rapaport’s answer went beyond leisure activities: “Don’t second-guess yourself.” She gave the example of how, on occasion, her children have difficulty with her leaving for work. “I don’t allow myself to feel guilty once I’m out the door,” she said, a strong conviction that has helped her make no apologies for her career.

There’s a lot to be learned from these powerful women, and we can’t wait to see what the newest technological advances will be with them at the helm.