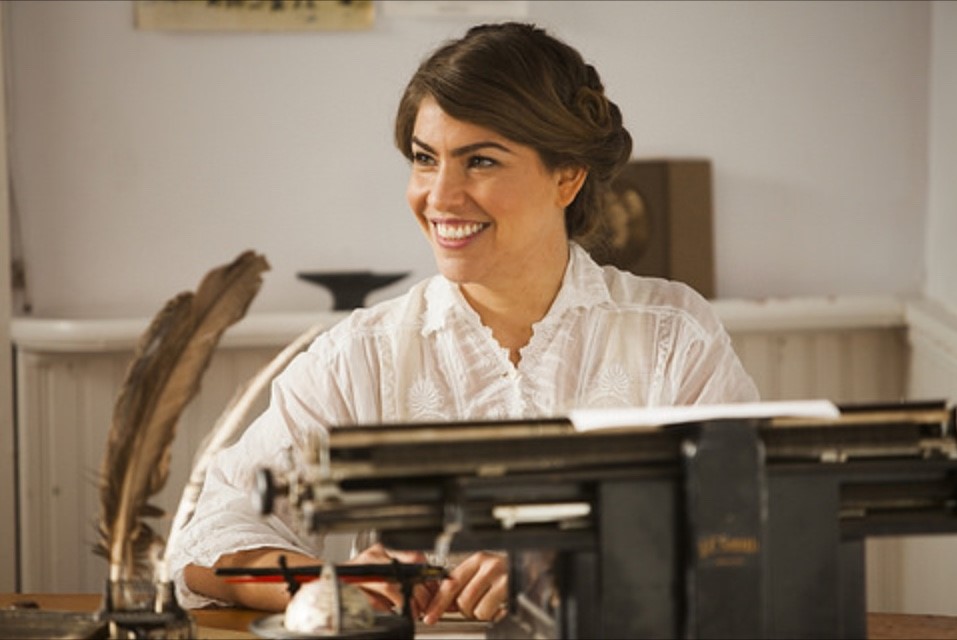 A Conversation with Lee Broda

A Hollywood Producer, Writer & Actor (via way of Tel Aviv!) on the Movie Business & Film Financing

Lee Broda has been working hard in entertainment her entire life.  A native of Ness Ziona, Israel, this writer, actor, and casting director has also worked as a producer on more than eighteen films, with The Trust, released this past March and starring Nicolas Cage and Elijah Wood, being her latest. Now working consistently in Hollywood, Broda, at just twenty-nine, has her own production company, LB Entertainment, where she develops projects, in addition to her work at Jeff Rice Films, producers of such high-grossing films as Lone Survivor, which was also named as one of the top ten films of 2013 by the National Board of Review.

Broda’s first memories of the business come as a four-year old dancing on stage. “I loved it, but at first I wasn’t very good at it!” she said.  “Ballet was a torture for me, but I was very good at all other styles.” She became interested in acting when she saw Peter Pan at the age of six. “I wanted to be like Wendy: fly up in the air and sing and never grow up,” she reminisced.  “Then, when I was eleven or so, I wanted to be on stage. I liked expressing myself that way, through music, acting, singing. And I also liked the attention, I think; the fact that you are on stage and a lot of people are coming to see you perform and they are being entertained and moved by a performer.”

Broda took the bus to Tel Aviv every day after school for drama classes, often not returning home until eleven p.m. Then she started acting school when she was sixteen. “I was already super-ambitious, and decided I would do what it took to be the best actress I could be,” she explained.  “So I went to the best school in Tel Aviv. After a few courses, I had to take a break because I went into the Israeli military for a year and a half. But I tried to take classes as much as I could.”

Once out of the military, Broda made her way to Los Angeles, where she studied at the Los Angeles City College (LACC) theatre program.  She continued her education by taking classes with well-known acting coaches like Margie Haber (whose clients include Halle Berry and Tea Leoni), Ivanna Chubbuk (teacher to Jake Gyllenhaal and Brad Pitt), and Joceyln Jones.

“All tough and super-smart!” she said.  “I loved their methods and techniques. I still use a bit of each when I work on a new role.”  She has since acted in over a dozen movies and TV shows, including NCIS, as well as the upcoming film Class Rank, starring Bruce Dern and Kristin Chenoweth.

After graduating from LACC, she went from acting, to casting, and then to producing in a mere five years.  She now has twenty producing credits, including this year’s The Phenom, starring Ethan Hawke and Pail Giamatti, and has also written, starred in and produced Shalom, a short film about finding peace in the Middle East.

As I sat down with Broda after premiere of The Trust at the 2016 SXSW Festival, she reflected on her journey in the entertainment industry, her role as an executive producer, and where she sees women in the film industry in the next ten years.

What was it like to start producing at such a young age?I graduated from a theatre conservatory around age twenty-four, and then I realized the industry was not as welcoming as I had thought!  I’m a foreigner, from Israel, with an accent, and so, looking a little bit more on the ethnic side, I realized I had to be more involved and create opportunities for myself. So I got into casting.  I was interning at a casting office, trying to meet as many people as I could.  From there, I moved to another casting office, and that’s where I met the producer I started working with —  and he opened the door for me as an intern and as an assistant for me to learn everything that I know.

Tell me about making the jump from casting to producing.I remember starting to take meetings and feeling like I’m “faking it,” like I’m just repeating the things I was hearing.  It was not easy at first… The bigger projects were all big movies — like big budgets — and it was all financing, which I did not know.  So it was just going home and doing homework all the time and understanding the language and what it’s all about – anything having to do with the business side of filmmaking. As an actor — even as directors, I think — we don’t understand that as creative people, it’s a business at the end of the day, and people are here to make their money back.  You’re playing with a lot of money, and you have a lot of responsibility.

What happens if you don’t make the money back?You have a lot of angry investors! But if a funder comes to me looking for a project, I feel responsible for choosing something that is not risky and that will at least break even. I tell funders that they have to be involved in the business; they shouldn’t just trust me. I’m good at what I do, and I have my opinion, but it’s their money, and they still need to be actively understanding what they’re getting into.  I also – frankly, and in an honest, upfront way — advise my funders to find a good attorney to review all the contractual paperwork in order to avoid lawsuits and fallouts if a film doesn’t make enough to recoup the investment.

What draws you to a film?I look for projects that have a meaningful storyline, an experienced director, or a cast with name recognition. These days, it’s difficult to make a movie without a known cast, especially in the range of budgets that I work in.  For the movie to really see the light of day, you have to make sure you have the right elements on each project. In the case of The Trust, those elements were the acting talent of Nicholas Cage and my prior experience working with producers Ali Brown and Molly Hassell.  It’s working with people that you know and trust, and believing that you can delivers something good.

How does having a creative side help being a producer?A lot of times, producers are the ones looking for talent for their films.  But because I act and I have a background in casting, I can see how actors might fit — and exactly where. Also, producers often work with directors and writers on set to ensure everyone’s needs are met – so I feel that my background in acting and storytelling helps me to manage the film’s budget without jeopardizing the director’s vision – I feel that, in a way, I can speak their “professional language.” However, the main crux of producing is facilitating collaboration and communication between different moving parts: investors, writers, directors, editors, distributors, and many more — and a producer’s role changes according to the needs of each project. Trying to accommodate everyone and make every happy — that’s the real role of a producer…working with everyone, and making sure everything works the way it needs to, and making sure everyone is happy at the end of the day, so they’ll do the best they can.”

What has changed for women over the time you’ve been working in film?People are saying that the statistics are better, but at the end of the day, you still don’t have women nominated for Academy Awards as directors; you see that it’s full of men.  I find myself working with men all the time, which is not bad — they’re wonderful and talented in their own way!  But for me, being a woman and standing up and trying to inspire other women, it’s important to me to be working with women as well. The main shift I see now is well-known actresses opening their own production companies and starting to produce, so there are a lot more projects that are female-driven either in story or directors.  I think it’s empowering for women when actors who have the power in Hollywood have their own production companies so they have the control to make decisions.  And they don’t sit and wait anymore for the right role to come their way; they can create opportunities for other women.

So women are finding ways to establish creative control?You see it a lot now, even in TV, with stars like Lena Dunham and Mindy Kaling; there are so many now — actors that otherwise, without being the creative force behind the project, wouldn’t get the opportunity to star in their own show and be well-known as an actor, too.  I think it’s great; I’m very excited to see what’s going to happen!