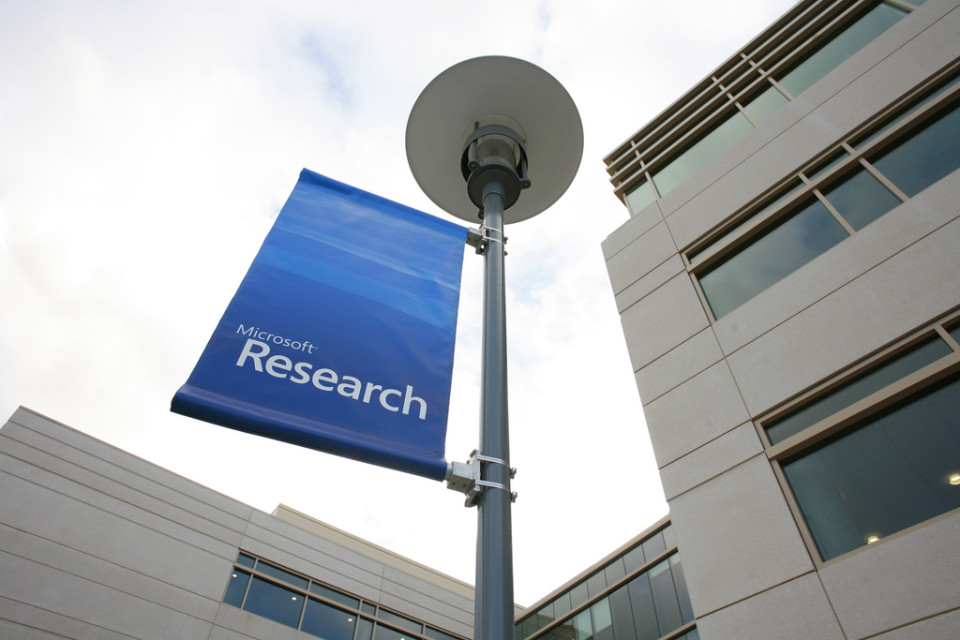 We use tech every day to solve our personal and business needs: order dinner and clothing; book movie tickets; create proposals; analyze data in minute, precise spreadsheets that can change the course of a company; and in general manage our lives with a smartphone in hand.

Women now voraciously, on a daily basis — and with much gratitude, given their busy schedules — consume technology that was created by computer scientists. The trouble is that the world currently has more consumers of technology than qualified producers.

An Eye Towards Tech’s Humane Effect on Society

Microsoft, a company who has contributed hugely to that everyday use, has reached its current  position through adroit planning, and seeks to solve that need for technology producers in the same way.

Twenty-five years ago, an internal memo at Microsoft posed an important question that led to the creation of Microsoft Research, the company’s dizzyingly brainy, future-focused division that has now amassed over a hundred researchers, scientists and engineers across fifty-five areas. The simple question was this: “How can Microsoft advance the field of computer science while also meeting its own increasing demand for qualified researchers, scientists and engineers?” They realized that to solve this demand, they would have to examine the mammoth company’s entire ecosystem.

To better understand how they accomplished this formidable task and eventually created Microsoft Research — now heavily influencing the advancement of women in technology — I spoke with Rane Johnson-Stempson, Director of Microsoft Research Outreach. Her background, with cross-disciplinary expertise is, coincidentally, reflective of that seeking-new-ways-of-looking-at-things mentality: she is a graduate of Bucknell University with a BS in Mechanical Engineering and a BA in Economics/Finance — and of George Fox University, with an Executive MBA in Transformational Leadership.

When we spoke, Johnson-Stempson’s first observation was that the core, societally-oriented aim of Microsoft Research casts a wide net, asking, “What can we do to really make Microsoft the next big innovation tech company that is building the tools, devices, and services that are really going to help people, companies, and organizations reach their full potential?”

She noted that once a preliminary answer to this is found, they can move on to more specific concerns: “How do we really show that computer science is on the leading edge of solving some of the world’s toughest issues?” and “How do we help different scientific researchers use tech in different ways?”

A Business Dedicated to Diversity and Solving Global Dilemmas

Johnson-Stempson noted that that they felt the answer to all of the above was simple: in a word, diversity.

The reason it makes sense: by increasing the diversity (and therefore size) of the tech pool from which they draw, Microsoft Research not only helps ensure its own future, it creates a sustainable habitat to foster the growth of the industry as a whole, across different cultures. After all, computers will solve – and are already solving – the world’s most challenging problems. It’s a fact now that the biggest issues facing the globe, such as climate change, will likely be solved using computers in collaborative efforts across disciplines.

One of the best places for such collaborative efforts is obviously academia, where people can prepare to take on the tasks that Microsoft Research actually carries out. So, as Johnson-Stempson explains, “We help the academic community really take on the information, data and insights we have, and bring it to the next level so that we can really make big innovations.”

Diversity of thought, they realized, depends on the entire pipeline, prompting Microsoft Research to look as far down the ladder as elementary students.  Johnson-Stempson explained this detailed, let’s-develop-the-next-generation thought process as, “What can we do to get the diverse K-12 students interested in computer science? Once they get to university, what are we doing to get them into undergraduate programs? Once they are in undergraduate schools, how do we get them excited about earning Ph.Ds? Once they have Ph.Ds, how do we get them to collaborate with us or to come work for Microsoft Research?”

Saving the World via Computers

This is where Microsoft Research’s data is changing the face of women in technology. The research indicates that girls and women want to work in a field where they can make an impact. The bald (yet reassuringly altruistic) truth is, they do not want to work only to make the company a lot of money.

So Microsoft Research is out in the field, telling girls and young women, “If you want to solve HIV, if you want to make it so that minors are not trafficked through technology, or find cures for cancers, get involved in STEM and learn computer science.” They educate young women  that they can study psychology, economics, or sociology – along with computer science – and use all of these disciplines to solve the complex problems plaguing the world.

Why Johnson-Stempson Felt Called to the Computer Field

Johnson-Stempson is uniquely equipped to address some of these issues. Legally emancipated at age fourteen, she worked full-time to put herself through high school, then college, where she earned her degrees.

Before landing at Microsoft twelve years ago, she taught middle school computer science and math; headed the IT department for a large school system; and worked at some dot coms. Through it all, she also worked with at-risk youth to give back and to pay homage to the teachers who helped and inspired her along the way.

With her “give-back” personal philosophy, Johnson-Stempson is committed to encouraging more women to get into tech. “We need to talk differently about engineering and computer science,” she said. “No one has an innate ability. If you talk to computer scientists, doctors, or engineers, most will tell you that they worked really hard to get where they are, to learn the tools they use daily.”

Emboldening Women to Get into Computer Science

We need to change the way we speak to children, she says, especially girls, to tell them, “‘You learn really well,’ instead of saying, ‘you’re really smart.’ Then, when our girls get into an engineering class where there is not a right or wrong answer, but there are six different answers, they don’t get frustrated. You learn in an engineering class that you fail, fail, fail, and each time you fail, you learn another solution — you learn how to do things differently.”

Unfortunately, young women who were straight-A students and used to “getting it right” can be overwhelmed when there are several solutions, or answers, to the problem and suddenly they are not, in fact, getting it right all the time.  Johnson-Stempson said, “We need to help students know, you’re gonna fail a lot, and that’s fine.”

Microsoft Research is changing the way we talk to young women about tech as well.

Johnson-Stempson said, “If you are a young woman and all you hear about is there is a dearth of women in computer science, and you’re going to be in a field with a bunch of men, that’s not exactly attractive, unless you are a young woman who is very confident and knows what she wants.” So to appeal to more women, they are educating parents, counselors and teachers that computer science “is a very creative and collaborative field: it is not just one researcher working alone in a cubicle. It is psychologists working beside researchers, ethnographers, designers, engineers and programmers — all creating together to solve one problem.”

Another innovation: Microsoft Research promotes the use of Skype in the classroom to enable classes to talk to directly with computer scientists. During these sessions, there is a deliberate emphasis on talking more about the history of women in computing, and to enlighten students, for instance, that the first computer programmer was a nineteenth-century woman, Ada Lovelace (daughter of the poet Lord Byron), who created the world’s first algorithm.

The next big thing coming from Microsoft Research: The Big Dream Movement, which provides girls tools, interaction, and support to build their dreams in technology. The ultimate goal is to solve that old, thorny issue: how to create more women as producers of technology, not just as  consumers.

The cornerstone of the movement is the documentary Big Dream. Microsoft has underwritten the production and partnered with organizations around the world to bring the story of seven girls who are pursuing careers in science, math, computing and engineering. The film launched at the Napa Valley Film Festival in November 2014, and will be shown at the SXSW Education 2015 event in Austin, in addition to private viewings across the country, all made possible through the movement’s partners.

What about women already involved in careers who now want to transition to a future-focused, state-of-the-art technology career? Johnson-Stempson said it is not too late to add that to their resumés. There are many academic institutions — some of which already collaborate with Microsoft Research — that offer accelerated one-year master’s degree programs to help women transition to tech from other areas.

So there is certainly time, if women out there want to be a part of possibly finding the cures for cancer, HIV, and Alzheimer’s, since those – as well as solutions to climate change, hunger, and many other previously implacable problems — will likely be discovered with a computer’s help.  And while just the word “tech” has a dry ring to many people, the truth is that even today, it is assisting in untold – and hugely comforting ways — to better humanity: kinetics now let an operating-room surgeon look at images on a screen without ever having to touch a mouse or keyboard. Microsoft Research’s goal with those and other scenarios?  A  devotion to finding a diverse, twenty-first century  “thought pool” to program them.