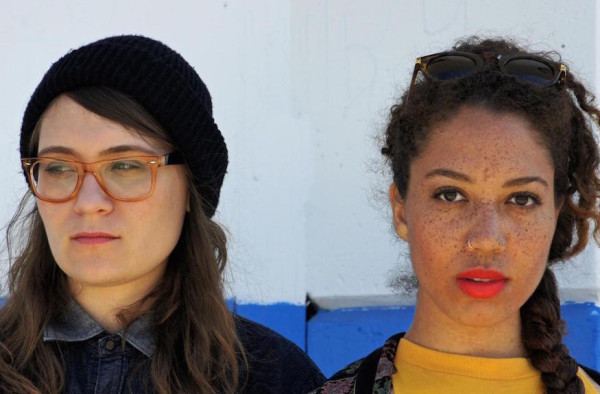 It’s easy to get caught up in South By Southwest’s seven days of non-stop live music, but for Austin’s epic festival, there’s a lot more to it than just crowd-surfing and crooning.

SXSW Music featured hordes of music industry professionals — executives, producers, and music journalists — on panels, seminars, and networking events. And if that weren’t enough, there were also over one hundred stages showcasing musicians from around the globe. In addition, unofficially, the festival also works hard to bridge the notorious gender gap. 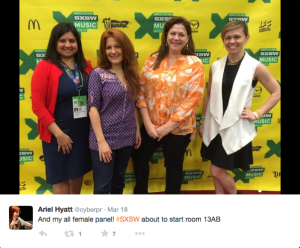 “SXSW has been great about assuring that female voices are featured on all their panels and [the festival] is dedicated to supporting women in music,” says President of Women in Music Neeta Ragoowansi. “It was a great step in the right direction when they started requiring that each panel submitted through their Panel Picker program include a female.”

Though it’s unclear exactly when SXSW made this an official requirement, it can be found on the festival’s Panel Picker FAQ sheet. The rule requires that all panels with three or more speakers include at least one woman. “There are thousands of extremely qualified women across all industries,” reads the official statement. They also encouraged panel creators to include speakers from a range of cultures and ethnicities, though as of today that is not a requirement.

The Mission of Women in Music

As the president of the New York based non-profit, Women in Music – which works to advance the awareness, cultivation, resources, and empowerment of women in the musical arts industry – Ragoowansi is no stranger to the Austin festival.

Having attended SXSW for years with previous positions – including Washington D.C.’s Kennedy Center, and SoundExchange – Ragoowansi has sat on many a panel, including last year’s discussion on the need for women leadership within the music industry. This year, she returned to moderate “The Rise of Female Entrepreneurs in Music.” Featuring three industry leaders – Union Square Ventures’ General Manager, Brittany Laughlin; Ariel Publicity & Cyber PR president, Ariel Hyatt, and Sceneplay Inc.’s Founder and CEO, Ann Greenberg – the Thursday panel focused on how innovation and technology helped advance each of their careers.

During their hour-long conference, Ragoowansi, Laughlin, Hyatt and Greenberg celebrated the growing number of women in professional roles within the music industry. Of course, they also offered advice to panel attendees on how to achieve their goals as entrepreneurs. Greenberg instructed audience members to learn how to code. The founder of Sceneplay – a cloud-based, collaborative video-storytelling platform – described website creation as this century’s “paintbrush” and a universal language. “It’s important for women to understand what it is.”

An entertainment law attorney by day, Ragoowansi has been working with WIM for over a decade. After sitting as vice president for several years, she became the organization’s president in January of 2013. As an advocate for the advancement of women in the music industry, Ragoowansi told SharpHeels she’s quite pleased with SXSW’s new panel requirements, but she’d like to see a few more changes overall.

“I’d love to see more stages dedicated to women, to bring an even stronger female spirit to the programming here. […] Women are still seeking role models amongst their own gender, and I would love SXSW to be at the forefront of presenting those stages.”

Giving women in music role models as well as a robust network of colleagues is one of WIM’s primary goals. In order to build a strong community, the organization holds educational panels – like the one Ragoowansi moderated as SXSW – seminars, networking events, and even award ceremonies. WIM also offers members an online platform to connect with one another. “We help build a community of women (and men) from the business and artist sectors to support each other,” explains Ragoowansi. “By cultivating such leadership and entrepreneurship, we believe women will better advance towards their respective goals, create a more ‘even playing field,’ and develop a more successful and thriving industry overall.”

High-Powered Panelists on the Contributions of Female Music Journalists

Across the multitude of SXSW events the playing field did, in fact, feel a bit more even. Throughout the ten days of conferences, the majority of panels were well balanced between the sexes. During Friday’s panel on the state of music magazines – which featured Jaan Uhelszki, founder of Cream Magazine; Alex Gale, senior editor of Billboard; Jim DeRogatos of the “Sound Opinions” show on WBEZ Chicago; and Ann Powers of NPR Music – women music journalists truly shone.

The panelists held a lively debate over whether or not music magazine were still viable in 2015 – discussing the resources successful publications can offer writers versus the immediateness of music blogs. Midway through the hour-long debate, Powers declared: “Music writing is stronger today because of young women.” She followed with a list of groundbreaking journalists including Pitchfork’s Jessica Hopper and Jezebel’s editor, Julianne Shepherd. “As far as community is concerned – and voices that haven’t been able to sing before – I think this is the golden age [of music writing].”

As the panel came to a close, Powers took a moment to offer SharpHeels’ readers – and aspiring journalists – a few words of advice: “It’s better now then when I was starting out – there was maybe one woman editor at Rolling Stone,” she said, while also admitting that she took an atypical career path. “But now there’s a lot more women at these publications – things are changing. It can be hard, but keep going.”

Open Mic: Young, Female, and Full of Flair and Skill

Aside from the conference sessions, some incredible female talent also graced the SXSW stages, and – like Ragoowansi predicted – the musicians inspired one another.

The Brooklyn-based duet BLKKATHY arrived in Austin Thursday morning to play the Aerobic International SXSW Showcase that evening, followed by an unofficial show the following afternoon. Though they’d only been in town for several hours, Kate Faust, the band’s singer and co-songwriter, had already seen one of her favorite woman-fronted bands, Ibeyi at Spotify House. “I actually watched them over the fence,” Faust admits. “It was awesome – they put on a very emotional show. Their performance was filled with this sisterly – twin – lovely, vibe. It was beautiful.” 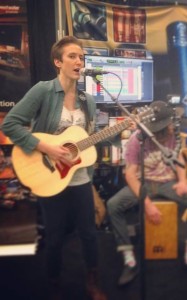 As an indie R&B band, BLKKATHY has been writing, producing, and performing music for just over two years, but the pair has been friends since college. Soon after forming they wrote a song, released it online and before they understood what was happening, the single was playing on BBC Radio, and streaming from a dozen music blogs. “We took a lot of meetings, and thought, ‘we’re about to be famous!’” says Faust.

Unfortunately, at the time the record deals didn’t align with the duo’s interest and they decided to decline the offers, and instead focus on writing more music. Today, they have an EP out, and are finally looking to record a full-length album. But the pair admits, they’re somewhat hesitant about a release. “We’re looking for a way to release it and really make an impact. But if it doesn’t come soon, I want to go back to the way we used to be, where we made a song and then immediately put it on the Internet,” says Faust.

“There’s a lot of second-guessing sometimes,” says Kate Linhardt who co-writes and also works as the band’s producer. “That’s why it feels so good to be [at SXSW], because it gets the music out there.”

Brittany Hill, the woman behind Kerchief (and formerly of Vanity Theft), agrees with Linhardt. “I look at my previous SXSW trips as the beginning of a road that will lead to my band becoming the favorite band of thousands of music lovers.” Kerchief played several shows during SXSW, including the official Gear Expo on behalf of Telefunken Mics. “You’re either a part of it or you’re not — and that’s why I decided to go.”

Before leaving to catch the next act, Faust and Linhardt offered some insight for young women in newly formed bands. “Be ravenous!” instructs Faust.

“Be ravenous and remember, sometimes you’re ahead of the curve and no one knows it and you just have to go with that,” adds Linhardt. “In terms of producing, don’t be intimidated by technical restrictions, because you just learn by necessity. Just do everything one step at a time and gradually it’ll all come together.”