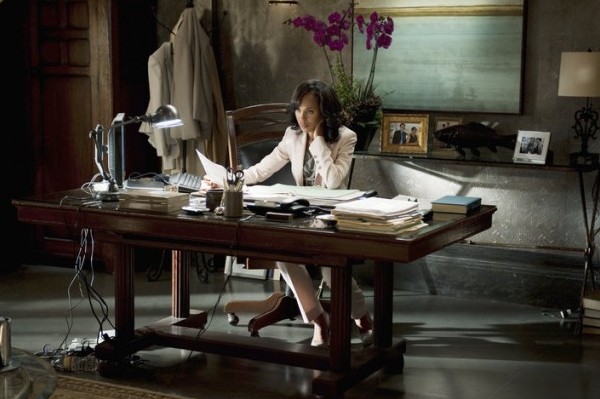 Scandal‘s Season Finale Not Only Topped Charts, but Also Dominated Among All Women Viewers Between the Ages of 18 and 54

Numbers don’t lie; Kerry Washington’s character has us all hooked including an Associate Manager of Accenture Federal Services, Adina Brazier. The 28-year-old has declared Scandal her favorite show on television today. Brazier sat down with SharpHeels to talk about how the series won her over.

SharpHeels: Why did you start watching Scandal? Adina Brazier: The show was special to me because it featured a black woman as the lead actress. I’ve seen Kerry Washington’s previous film work and was interested in seeing what the TV project could offer.

SH: What’s the premise of the series? AB: Olivia Pope, a well-known power figure in the D.C. area is a “fixer.”  She’s famous for getting high-profile politicians out of situations that could damage their image. Adding to the drama is her romantic involvement with POTUS. She staffs a team of gladiators (former clients) who feel indebted to her and will do just about anything at her request.

SH: Olivia Pope – what are your thoughts on her character?AB: I think she’s troubled.  Professionally, she’s a brickhouse – there’s no one better.  But her personal life is a wreck. I believe a lot of her trouble comes from her childhood situation.  Unfortunately, her mother died when she was young and her father was preoccupied with work. Then when he was around, he only pushed her to be smart and independent, rather than show her any affection, so she never learned those dynamics.  In the show Olivia does what feels right.

In two and a half seasons she’s had three love interests.  She falls hard in love (lust) with powerful men who show her some affection.  She can’t help it.  Otherwise, she’s got it together.

SH: Why is her character groundbreaking and how does that relate to real women in business? AB: There are a couple of reasons.  To be frank, she exhibits a black woman in a powerful, well-respected role.  A lot of the times, black women in the media play the “best friend” or the “employee” or the “girl who can dance in the club scene” roles. The role of Olivia could have been given to a white actress, (or any other race), or even a man for that matter. But it wasn’t. I think this show is doing a lot to break black women stereotypes, and I know that it’s increasing self-esteem for some.

Beyond race, Olivia’s character does a lot for women in business.  She owns her own business, her work is highly sought after, she’s earned the respect of all the men she employs (they almost idolize her), and she stands her ground with the men she works next to.

The only downside is that she drops everything* any time the President calls. True, she – sometimes – acts like she doesn’t want to, but he’s a real weakness for her.  Granted, he’s the most powerful man in the free world, so he’s not the most terrible weakness, but he’s also married … I’m so torn!

SH: Is Scandal helpful for Black women in business? If so, how?  AB: I can’t say that the show has made me a better businesswoman, perhaps a better dresser though. She laughs. But seriously, seeing Olivia Pope play a sharp, well-respected businesswoman is fantastic because there aren’t many black women playing that part in the media. I don’t speak for all black women, but I’m really proud that I’ve finally got a “home girl” (someone I can identify with) on TV. However, this one show can’t help black women in business because there are too many other shows that negate Olivia Pope’s positive characteristics.

The sad truth is that there are some people who only have the images on television to shape their perception of black women. My hope is that Olivia Pope is showing a different side of the black woman (even though there’s a lot of sexual content in this series). It’s going to take so much more than a single television show to help reshape our image. It’s a circular problem, but if we see more examples of us as sharp, well-respected businesswomen, then we’ll feel empowered to reach that example.  And as we change our own perception of who we can be, others will to. It all starts with exposure.

SH: Do you relate to any of the characters? AB: I think I relate to Rowan Pope (Olivia’s dad) the most. His world is very black and white.  He doesn’t see shades of grey. If there’s a problem, he does what he has to do to solve it – no matter the measures.  He’s strong willed and, honestly, I think he has the best moral character in the show. Yes, he does a dirty job and sometimes he’s seen as the bad guy.  But his mission is to protect our nation – therefore, serious and drastic measures are necessary.  I think in the same manner: “do what is right whether it’s uncomfortable or not.”

SH: Many people have said that Olivia Pope’s fashion is one of the highlights of the show – do you agree?AB: Uh…. yes!  In other shows, if a woman is in a position of power, she’s dressed in some boring business suit.  Olivia’s world is so different – she doesn’t work at a desk all day.  Her attire symbolizes her stature.  She dazzles in beautiful gowns at White House galas, she rocks a tailored suit (but in a vibrant color) to the White House, her coats and gloves are so sharp!  It just shows that Olivia’s image is supposed to be pristine.

SH: Kerry Washington – are you a fan of her other work?AB: Yes. But I think this is her best and most mature project. She was good in I Think I Love My Wife with Chris Rock, but she played “the other woman.”  In Save the Last Dance with Julia Stiles, she was the sidekick. And she was funny when she hosted Saturday Night Live.

I think, over time, she’s gotten more acclaim and she deserves it.

SH: Why should people tune in?AB:  I don’t have to tell people why they should watch Scandal.  The show sells itself! Within my friend circle, there are people who don’t watch the show because they believe it glorifies adultery. But I give Fitz and Olivia a pass – though that’s probably because I’m aware that it’s just a show.  If it were real life, Olivia would get a real “talking to” from me. But the acting is phenomenal; the drama is over-the-top but also incredibly consuming; and the underlying love story will have you questioning your own morals.

Try it for yourself and you’ll know!