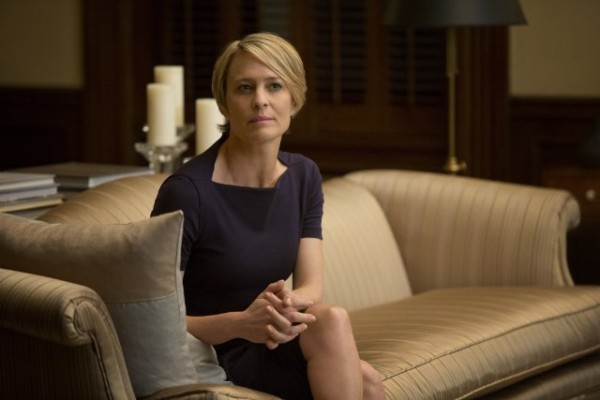 Behind Every Great Man is a Woman

The saying is old, and often times meaningless, but last February, when Netflix reinvented the television drama with the release of House of Cards, that old phrase was brought into question. 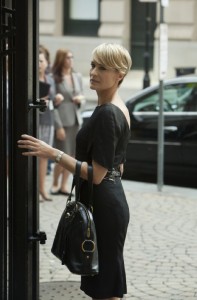 As the wife to the House Majority Whip, played by Kevin Spacey, Wright gives an unshakeable performance as not only Spacey’s partner in crime, but also the head of a fictional non-profit based in the heart of D.C.

The character is cunning, but not unlikeable. The New York Post calls her an entirely different type of leading lady. Wright, as Claire, portrays a woman with political power in a way that’s rarely been seen in Hollywood.

“Wright is defying the traditional female stereotype,” says a present-day consultant, TI. “Similar to Olivia Pope on Scandal, Claire is ruthless, calculating, and effective. Especially when compared to TV shows of the past – Charlie’s Angels, Wonder Woman – she’s playing a game on equal level with the men, and it doesn’t mean a thing. We finally have female characters that are playing in politics with men.”

Over the last year, reviewers have called Claire an ice queen, and the LA Times describes her as the “headstrong political wife.” In actuality, she’s an equal to her husband, and equally unapologetic about her actions as he is.

“She makes a plan and goes after what she wants, yet she doesn’t lose her femininity,” says TI. “Look at the first women in congress – Barbara Mikulski [the first elected democratic woman senator in 1986]. She had to be shrewd. But if TV reflects change, or vice versa, Claire looks like someone you would take to dinner and that’s new.”

Wright, who is an unquestionable equal to her Netflix alter-ego, has been a long-time activist. In the mid-2000s she partnered with the Enough Project’s Raise Hope for Congo campaign, working to end violence in Eastern Congo in connection to the trade of conflict minerals. 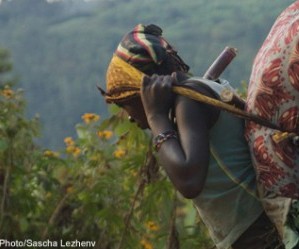 As an advocate, she’s traveled to the Congo, spoken at universities and sat on panels alongside members of congress and government officials. In June of 2013 Wright co-wrote an article on Politico celebrating a small success for Raise Hope. After continuous pressure, President Obama and his administration agreed to appoint a special envoy in the African region.

Similar to her House of Cards alter-ego, Wright has dedicated herself to this project. Her Twitter feed @RealRobinWright has more snippets about her work with Raise Hope than her work as an actor.

It’s been said that as an actress, Wright has denied past movie offers because she didn’t want to be judged or remembered solely for her beauty. It’s no wonder that she brings her personal strength, passion, and independence to the role of Claire.

Women in business can’t seem to get enough of Claire Underwood, so it comes in good tidings that season two will be released on February 14 on Netflix. All 13 episodes will be available for streaming. However, it’s still uncertain as to whether or not Wright or Spacey will return for a third season, so we recommend a less binge-induced screening.

House of Cards photos by Melinda Sue Gordon for Netflix