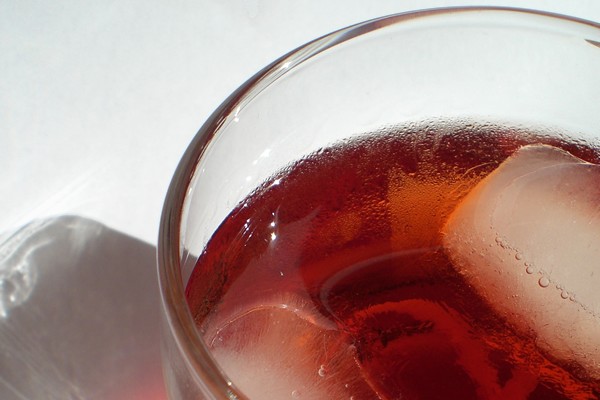 The Negroni cocktail (above) is a favorite of Christy Pope, mixologist and co-founder of Cuffs & Buttons in NYC

A bartender pours; a mixologist creates. While not a hard and fast rule–there are some excellent bartenders that do more than simply pour–mixologists like Christy Pope merge old school cocktails with innovation and inspiration.

Christy Pope’s dream was born in a bar, specifically NYC’s Milk & Honey. Pope is a founder and co-owner of Cuff & Buttons, “a dynamic beverage consulting and catering company that combines a hip downtown attitude with just enough uptown sophistication.”   “One fated evening I was sipping tequila and freshly squeezed grapefruit juice (revolutionary at the time) and Sasha (Petraske, owner of Milk & Honey) joined my roommate, Marcus Miller and I, at our table…,”said Pope. What came next altered Pope’s future. 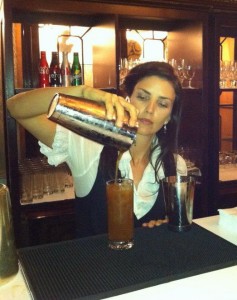 Pope had been frequenting Milk & Honey since shortly after its opening in 2000. She loved the bar, which was unlike any bar that Pope had been to before. Pope was a DJ at the time, working primarily on the Lower Eastside of Manhattan, and “was always looking for new gigs” when Petraske mentioned to her that he needed a server for table service. Despite having zero experience cocktailing, Pope blurted out that she would do it. That spur of the moment decision led to an education in mixology from some of New York’s finest including, “Elizabeth Sun (now member of Gogol Bordello) and Joseph Schwartz (now owner of Little Branch, Middle Branch, and Silver Lining.” Pope said, “I was green, but I was hooked.”

A week later, 9/11 happened and with it the closure of almost everything below 14th street. In a streak of solemn serendipity, Pope interviewed for an additional job at The Cellar Bar in the basement of the Bryant Park Hotel, to help make ends meet, where she met fellow interviewee, and now partner, Chad Solomon. Solomon was hired as a bartender and Pope as a cocktail server. It was Solomon who was instrumental in “helping me ascend from cocktailing to bartending” Pope said.

In 2006, after several years of working together at Milk & Honey, Pope and Solomon collaborated with Petraske to create Cuffs & Buttons, the first craft cocktail catering company in NYC, to bring craft cocktails to private events.

“Cuffs & Buttons was the first truly craft cocktail ‘beverage only’ catering company of its kind in NYC…We have some clients that we have been doing events for since we started in 2006. I think that speaks volumes,”explained Pope. As pioneers in the industry, they “had to figure out how to maneuver the various regulations & licensing that govern alcohol sales & service, being insured & bonded, and how to work with other catering companies for the benefit of the client, and creating a service that has the flexibility to work in events of all types and (most) sizes.”

Although there is little formal training for mixologists, Pope has “studied” under some of the best in the business as well as having completed the B.A.R. program taught by Dale Degroff, Dave Wondrich, Paul Pacult, and Doug Frost, and she is currently working on the second stage Cicerone certification. More important than formal training is Pope’s enchantment with the ability to “exhilarate people with craftsmanship and thoughtful service.” Pope scours vintage cocktail books, often taking them home to study, through which she brings contemporary twists to classic cocktails.

Driven to take cocktails to greater heights, Pope and Solomon began consulting in 2007 “to travel the world teaching and speaking on behalf of cocktails and spirits.” Currently, Petraske is a silent partner in Cuffs & Buttons in catering only. And Solomon and Pope divide equally the needs for both the catering and consulting components of Cuffs & Buttons.

If you haven’t heard of a consultant that’s an expert in cocktails, that isn’t surprising. Pope acknowledged, “Truthfully, this is not a career that you could have had 20 years ago.” She credits being in the right place at the right time and recognizing potential to “capitalize on the movement and momentum” for her success. What they lacked in formal business education as well, Pope and Solomon have learned along the way. Despite a dislike for some of the more mundane aspects of business, such as Excel spreadsheets, Pope said, “These tools help us bring the creative cocktail & spirits work to varied environments.”

Cuffs & Buttons has achieved a diverse client base of private clients for parties, celebrations, and weddings to many creative clients in design studios, Broadway shows, and museums, and to corporate clients of all types including law firms, finance companies, soft drink companies, etc. They believe, “if you build it well and continue to execute well, they will come.”

Their philsophy has worked brilliantly thus far. In addition to operating and expanding Cuffs & Buttons, Pope and Solomon opened a bar in LA in 2009 with Audrey Saunders called the Tar Pit. In 2013, they partnered with a long-time consulting client to create a craft cocktail and spirits program at the Joule Hotel in Dallas, TX, where they will open a craft cocktail lounge, in late August.

When they create a specialty cocktail for an event, “inspiration can come from anywhere… a theme, a mood, a song, a landscape. I think this is true for any creative endeavor.” Pope said, “However, if we are working with a client, inspiration starts with their goals and needs.”

Pope’s recipe for women starting in business involves the same basic elements: dedication to your craft, education to refine your skills, and marrying the right people with the right circumstances.

Just do it, know that it will be difficult, and persist.

Often times when you read articles like this, everything seems like it was easy, but I can assure you that any achievement in business has been hard won with dedication, time, energy, blood, sweat, and tears, and complete persistence. It’s how you deal with the difficulty that will determine your course.

What you do behind closed doors is what will set you apart when you’re on stage (so-to-speak). Continue to educate yourself on your industry and in business skills. For the later, we are in such a great age where can “you tube” and use the internet to take online classes and tutorials to help you beef up your business skills. Be resourceful in your spare time.

It’s all who you know.

This does not mean nepotism, but one thing that I have seen from afar and experienced first hand, is that relationships are very important and you never know when they will work for you or against you. Be sure to treat everyone respectfully and be sure to be sure to work with integrity. Network in your industry and showcase your passion to everyone… its contagious. Anyone can be someone in your future business.

I just had to ask  Pope, “If you were a cocktail, what would you be? (What are the ingredients and why?)” Her answer quite beautifully sums up her business as well…“more than meets the eye.”

She replied, “This is a tough question to answer… had to really think about this one, but I suppose if I have to choose one for now it would a Negroni. There is more than meets the eye to this cocktail. It’s beautiful, but very complex, and it gets better the more often you have it.”

Her preferred Negroni recipe is