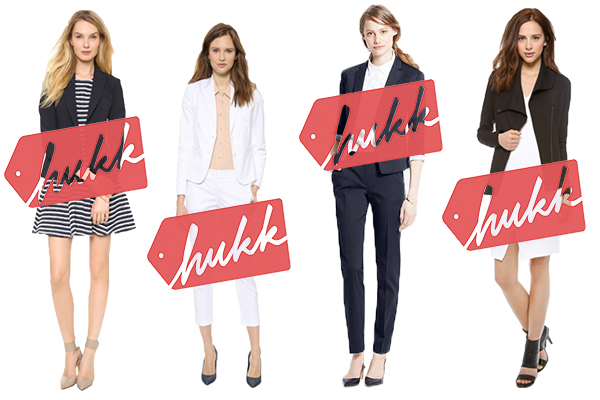 Want a Deal? Hukk It!

If you haven’t already started using Hukkster, it’s time to get hukking!

Launched in 2012, Hukkster is a web-based, price-finding shopping platform developed by former retail merchandising co-workers Erica Bell and Katie Finnegan.  When they realized they wanted to snag the current season’s fashions at a discount, but found themselves frustrated by having to weed out marketing messages not applicable to their fashion wish lists, they dreamed up Hukkster.  It’s a site that marries your exact wish list items (oh, joy!) to relevant promotions, ensuring you get exactly what you want at a price you’re willing to pay. Explains Finnegan, “Our goal is to simplify the online shopping experience, while making coupon codes and deals accessible to the masses.” 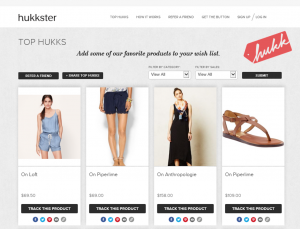 Here’s the breakdown: After installing the Hukkster button to a browser bar or downloading the app, consumers can tag specific products, right down to the size and color they’re interested in (i.e. “Hukk” them) and then receive alerts the moment the product is available at a discount. “We aggregate all the coupons, special limited-time offers, and friends-and-family sales, and if they apply to the specific item you want, we let you know. Simple as that – we don’t bother you otherwise. You’ll get an email, text or “push notification” when something you want is available.  We’re not spamming you with content that’s irrelevant.” Or, as Bell notes eloquently: “It’s like a flash sale that you’ve curated.”

The distinction between Hukkster alerts and flash sales is clear: quite often, when you buy an item in a flash sale, you might be buying it because you like the price, rather than admiring the item (admit it: you’ve sorted results by “price – low to high” before!) .  With Hukkster, it’s the exact opposite – you make note of the fact that you like the item before the price. Bell further explains, “With flash sales, you lose the consideration phase. You don’t have as much time to think about the purchase. As a result, after a couple times, you might feel guilty.  Here, you get that consideration phase back. It generally takes about two weeks to receive an alert, giving you time to think about it, and putting you back in the driver’s seat.”

The brilliant simplicity of the concept is striking. And I’m not the only one who thinks so…Bell and Finnegan garnered early funding of over $3 million in multiple rounds from noteworthy investors, such as  Winklevoss Capital Fund (yes, the same guys featured in The Social Network) , New York megamillionaire and investor Lisa Blau, Henri Bendel President Chris Fiore, and Tumi CEO Jerome Griffith. With their apparent meteoric rise, I can’t help but wonder if they’ve actually had to turn away investors. Not surprisingly, the answer is yes.

The Simple Allure of a Customer-Centric Approach

Why is it so attractive? Bell explains: “It’s one of those things where the platform really resonates with a lot of consumers. A lot of people actually use the platform, whereas a lot of technology today is smart, but not accessible — so this has been a really fun consumer platform to run with.” Of course, with investor cash comes the issue of not only adding “cooks to the kitchen,” but also diluting their personal stake in their own brainchild. But Finnegan, responding with the savvy of someone who seems to have been in the game much longer than her few years, says, “For us, it’s about growing the pie much larger  — and while you might have a smaller piece of that pie, if an investor is going to be ‘disruptionally different’ for your business, and help you accomplish things you could never do without them, we’ve always said that’s worth it.”

Before you file this under the “I wish I’d thought of that” tab, there are a few things you should know about Bell and Finnegan. First, these women are both enviably educated – Finnegan with an undergraduate degree from Colgate and an MBA from Duke, while Bell graduated from Columbia.  Second, they both earned their retail pedigree with venerable names in the retail business – American Eagle, Gap, J. Crew – plus retail and management consulting gigs at global consulting giant A.T. Kearney.  In other words, they not only had a great idea, but also a solid, in-depth  fount of insight into exactly what retailers are trying to accomplish.  A perfect marriage of creativity and solid know-how.

“I think having launched this business as former merchandisers, it was a lot easier for us to pitch our value proposition to the retail brands. We know very well what retailers are trying to do with these promotional messages,” says Finnegan. An example she cites: every dollar a consumer saves is another dollar she has to spend. “It was a combination of coming at this with a unique perspective of our background, and knowing the 25-40 female demo that all retailers are trying to get their hands on.”

A Runaway Success with Retailers

What seems curious is how much retailers have embraced the concept as well. You’d think they’d want to protect margin and sell as much full price merchandise as they can. However, with over 2,000 retail partners to date, it’s obvious retailers believe the Hukkster consumer adds value to their bottom line over trying to sell merchandise at full price. After all, says Finnegan, “The majority of what we focus on is “in-season inventory” at a promotion. The average discount the Hukkster customer is getting is 20-30% — still high margin for retailers, and based in their established marketing plans. It’s about getting the messaging in the right person’s hands at the right time.”

She further clarifies that by having received the right information when they need it, customers are helped in “moving up the funnel,” i.e. they are able to buy merchandise at desirable prices earlier in the season. This then permits retailers to sell at a higher margin, well before reaching clearance discount levels.

So really, it seems they almost see themselves as messengers or deal-brokers.  In fact, this is at the root of the name “Hukkster.” Explains Bell, “’Huckster’ is an old term that used to refer to a peddler – someone who went door to door selling wares and making deals. We’re your modern-day ‘hukkster,’ bringing those deals to your inbox.” 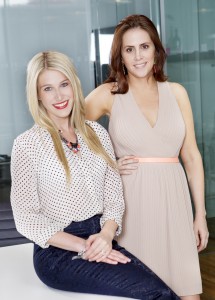 Now with solid backing to pursue their business plans, an estimated 250,000 users, a staff of 15, and new SoHo (NYC) digs for Hukkster to call home, Finnegan and Bell are already fast-tracked, seasoned veterans, even sharing words of wisdom to would-be entrepreneurs.  “Everyone with a great idea who decides to take the leap might think it’s going to be all about building the product —  but in fact, building the team was definitely the most critical part of this journey, the most rewarding, and honestly, took the most time throughout. That team-building component doesn’t get enough play,” says Bell.

Finnegan also stresses the importance of a well-functioning partnership. “Whenever we hear people looking to start companies with their best friend, we always challenge them to do something really stressful together that’s more like the high intensity of a work environment, and first make sure that you work well together on that level.” Also, even with good partners and a great idea, “overnight” success requires you to pace yourself. “When we approached it, we really did look at it in small, tangible segments. So, in the beginning it was 1-2 week milestones. It’s very easy to get overwhelmed with the bigger tasks,” Finnegan warns.When it comes to their own growth, Finnegan says they have finally reached a point within the past six months to build a roadmap that extends into the next few years. The most recent addition to the Hukkster repertoire is the “Hukk or Not” feature, which adds a browsing element to the personal wish list, delivering essentially an endless feed from favorite retailers for customers to browse and add to their “Hukk-It” list. There are also promotions exclusive to Hukkster that won’t be found anywhere else, and additional enhancements are on the horizon. In other words, as Bell put it best, “You should be Hukking everything.”

Erica: I have my eye on these classic Joie Leather & Suede heels.  I don’t need them immediately, so I’m eagerly awaiting the next Joie promotion when I can make this purchase  — as it’s finally time to retire my winter boots (thank God!).

Katie: I have Tulum on my mind! I will be traveling there in a couple weeks with some friends, so I’m craving a warmer weather wardrobe. I’ve been scrolling through our “Hukk or Not” feature on my iPhone every day to discover new products, and have uncovered some great cover-ups and summer dresses. This sarong went on sale at Piperlime this week, so of course I had to pull the trigger and buy it for $29.97, which was originally $55 – that’s 40% off!!

“Thank you so very much for shopping with Hukkster over the years and supporting us in our mission to save you time and money on the brands you love.  We started Hukkster with nothing more than an idea and had the opportunity to build our dream team and make our vision a reality.  While we’re sad to say goodbye, we hope our story inspires all of you to challenge the status quo.”   – Katie & Erica, Hukkster Co-Founders