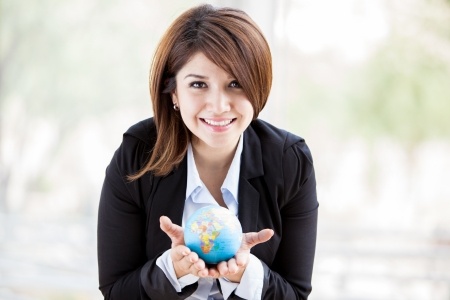 The World Is Your Oyster

Fifteen Women Whose Advice Will Change Your World

Sometimes the messages from the intelligent, successful women we interview is so good that it bears repeating. These fifteen women make us think twice about how we view women’s success: what defines it and how does a woman achieve it? What do they all share? They all believe the world is your oyster. Only you can create the career and life you desire.

Find your Inner GeekJ.T. O’Donnell, CEO of Careeralism Inc. said, “Don’t let people tell you why it won’t work,” and “What am I a geek at?” She wants her career coaching clients to figure out what problems they can solve that they would happily spend all day figuring out.

Change Your RealityLiz Ryan, CEO of Human Workplace, said, “As long as you accept something as your reality, as long as you argue for your limitations, you will own them.” Change your reality by changing how you think and approach your job.

Investor Relations are a MarriageAmy Millman of Springboard Enterprises said, “The investor experience is like a marriage. Everything sounds so wonderful…they are giving you money…there’s all this excitement and investing in you, and obviously in a marriage it’s investing in you, and they’re saying they love you. But then, like in a marriage, you hit a lot of bumps along the way, then people change and situations change and people get disappointed in each other, and then they either deal with it and grow and figure out how to work with each other or not.”

Dream BigFelena Hanson of Hera Hub says, “Life is too short to play small.” She believes that women often don’t dream big enough. Set your sights on achieving something scary, even if you cannot find anyone who has ever done that exact thing before.

Emulate the Right PeopleAria Finger, COO of DoSomething.org said, “Sometimes we look at the Richard Bransons or Sheryl Sandbergs of the world and try to replicate their game plan.” She suggested that instead of emulating someone 30 years in the future, emulate someone 3 years in the future. “They might not be the president, but they have a job that you want.”

Define Your Own SuccessAshley Routson, aka The Beer Wench, “Success to me is the respect, the speaking gigs and the book. Maybe you aren’t motivated by fancy cars and big houses. That’s okay. You won’t feel successful if you are receiving payment in the wrong currency.

Make MistakesTerri Funk Graham, former CEO of Jack in the Box advises, “You’re going to make mistakes, and that’s okay.” She should know. She helped move Jack in the Box restaurants through major challenges and several re-brands.

Fail UtterlyCoco Chanel – Success is often achieved by those who don’t know that failure is inevitable.

Believe there Is a Better WayLaurie Cooke, CEO of the Healthcare Businesswomen’s Association said, “We want to show that there is a different way. We don’t have to have a mentality of scarcity.” Women should believe there is enough to go around. We can share ideas and all benefit.

How Does the World See You?Neena Newberry of Newberry Executive Solutions says a woman should be aware of  three things: purpose, presence and power. Purpose- Where can you make the biggest impact? Presence- Make everything you do and wear reflect your purpose. Power-What is the impact of your skills?

Find Balance in the Family BusinessJoann Kim of Johnny’s Fashion Studio on working with family. Respect each other’s expertise. “Before I am the boss, Johnny’s the boss,” Kim said. Family businesses don’t have to be a power struggle. They offer an exceptional opportunity to relate to family as colleagues, to learn and grow with them.

Monitor Your Personal FinancesRebecca Jackson, COO of Go Girl Finance, said, “Even women with significant assets are not accessing financial advice and planning at the same rate as men. In fact, a recent survey by the Center for Talent Innovation found that 30% of women with $1million in assets, in their own name, do not have a financial advisor.” Jackson said. Know your net worth, and get help to expertly manage it.

Seize OpportunitiesConnie Whitton, executive Business Coach, says, “Don’t Sit Back and Wait For an Invitation to the Corporate Party.” Invite yourself to the table by asking for opportunities you’d like to have.

Build a  Stellar TeamBarbara O’Connor, Chief Marketing Officer of Move Inc., the parent company of Realtor.com, Moving.com  said on team building, “I like to surround myself with people who complement my skills and who are as smart as they can possibly be so that I always think of succession plans. I look for women and men people who complement your skills and are as smart as they can be. Look for women and men who are hungry to learn, and that’s because the industry is changing so quickly. I would rather have someone with a little bit less experience and who is willing to take classes and be coached over an MBA from a prestigious school who thinks they know everything and should have your job within six months.

(How to) Survive and ThriveJennifer Gilbert is the life of the party in the event planning industry, as President and Chief Visionary Officer of  Save the Date® an award-winning event management company. She advised women in business to do three things: ask for help, find mentors, and build a network. Jennifer built her business in the wake of personal disaster. She reminds women that  their mentors don’t have to work in the same industry. Build a network of successful women and men by asking for assistance and finding mentors to help you grow.