The Girl Scouts of Greater New York hosted its annual Girl Scout Gala on April 29, 2015 to honor visionaries, corporate leaders and philanthropists who serve as role models to area girls. According to their office, “Girl Scouting reaches 29,034 girls in New York City – two-thirds of whom are from low-income homes.” They believe that “every girl, in every borough, should have the opportunity to be a leader in her community and society,” and want to “provide girls with the critical skills, self-confidence, and real-world experience that they need to succeed.” 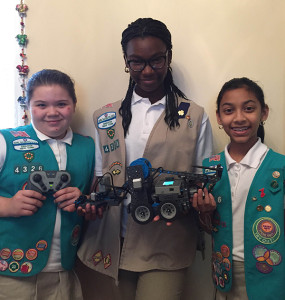 Because of the growing movement to encourage more women to pursue careers in technology, we asked Sarah Pooley, Manager of Youth Leadership and Volunteer Support for the Girl Scouts of Greater New York, to explain more about how their STEM programs are preparing and piquing the interests of girls and young women.

STEM’s Critical Role in the Future

“Since 1912, we have continuously been striving to keep our program up to date and relevant, and training girls for what lies ahead of them. Over the years, our programs have evolved to reflect the demands of the changing world, and the Girl Scouts of Greater New York want to prepare girls for that changing workforce,” Pooley stated. So, when employment data showed women in tech fields earning larger salaries than women in other fields — but that there were fewer females in tech fields — the Girl Scouts took action.  They promptly added STEM as one of their program areas in 2012.

For younger Girl Scouts in grades K-5, the council sponsors Girl Scout days at various venues around the city, such as the Museum of Mathematics and the New York Hall of Science. They also collaborate with organizations to create the STEM Program-in-a-Box, which leaders who might not have a background in science or math can use to introduce their troops to STEM activities (including basic engineering skills), right in their weekly meetings.

“These STEM Programs-in-a-Box teach the fundamentals of science and engineering,” Pooley explained, “Our older girls — whom we consider to be 6th grade through 12th — get a lot of exciting opportunities too. This year we had a series offered in web design, and another one in digital movie-making.”

This summer, the Girl Scout Leadership Institute, in a partnership with the New York Hall of Science, will provide a program for high school girls to develop their own web apps.  STEM programs always are filled to capacity, and leaders have asked for additional STEM training for themselves to enable them to serve the girls better.

In addition to the STEM program, the Girl Scouts of Greater New York offers a robotics program for girls of all ages. This year they had thirty teams participate from all five boroughs who used the Vex IQ robotics kits, containing components suitable for all ages, with training for leaders to instruct them how to be guides for their robotics teams. (The distinction of “guide” versus leader, or teacher, is significant in the Girl Scouts program, and especially for the robotics teams, because many of the programs are girl-led.) So girls, with the guidance of adults, build the robots from start to finish, and when they encounter problems along the way, must also find solutions.

The girls spend November through March building their robots, and then celebrate their achievements with a special robot expo, during which they can show off their accomplishments, and see how other teams fared with their mechanical creations.

The response of the girls to the robotics program—the Girl Scouts get feedback from the participants at each event—has been excellent. Most notably, girls indicated that one of their favorite elements of the program was working as part of a team. That’s good news for the workforce of the future that increasingly will be expected to collaborate on projects. Pooley provided an example of this sort of spirit: “One Girl Scout Junior (grades 4-5) responded with, ‘I loved evaluating and solving problems!’ ”

Developing problem-solving skills, in fact, is a big part of the Girl Scout STEM programs. Pooley was thrilled when girls told her they innovated ways to use tweezers for tiny parts, or that they took apart and reassembled their robots in a different way to stop them from spinning in one direction.

Vital Partnerships with the Corporate World

The Girl Scouts of Greater New York are interested—as are Girl Scout councils across the country and the globe—in partnering with companies and organizations to bring STEM programs to their troops. Worksite visits are an essential part of successful STEM programs; as Pooley noted emphatically, “It is especially important that the girls see women succeeding in STEM fields.” So through workplace visits–such as the one the girls from the robotics team took to the fabled Chrysler Building to visit Girl Scout Gala honoree, Adele Gulfo, Chief Strategy Officer, in Mylan’s boardroom–girls see where a STEM education can take them.

Although the Girl Scout gala festivities are over until next year, women can still make a difference in the lives of girls and young women by partnering in STEM programs with the Girl Scouts of Greater New York, or by contacting the local Girl Scout council in their own area. After all, there is no telling how a seemingly small action like this can affect the potential of youth, and result in world-changing skills; if ever there was a field that has the capacity to do that, it is STEM.