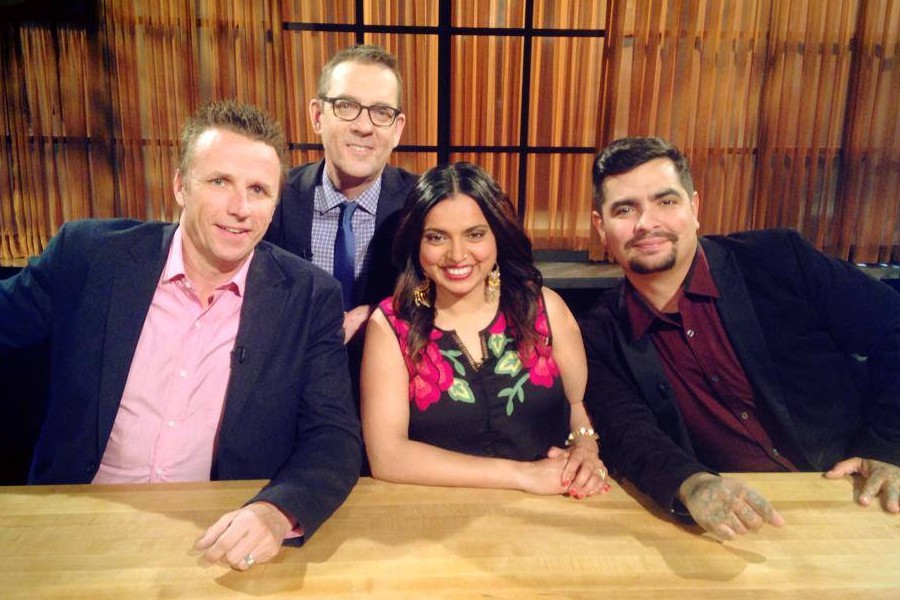 From the Chopping Block

Maneet Chauhan Says It All Comes Down to the Food

Food fanatics, reality TV lovers, and competitive personalities all love Chopped.  The Food Network’s reality-based cooking show has left audiences hooked and feeling like would-be chefs.  With a six-year run, and 20 seasons on the chopping-block, the hour-long show has become a Tuesday night staple.  And while the competitors are quick to win TV viewers’ hearts, it’s the judges we can’t live without. 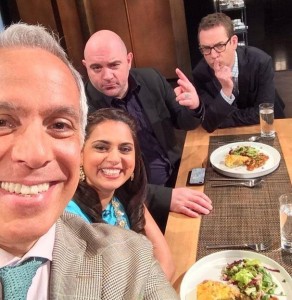 As the newest full-time judge, it might be easy to believe that Maneet Chauhan has some big shoes to fill, but the award-winning chef is no stranger to the spotlight.  Besides a personal White House invitation, a stint on The Iron Chef and The Next Iron Chef, the release of her cookbook and a line of spices, Chauhan is in the process of opening her very first restaurant.  In fact, she just might give new meaning to the phrase “does it all,” since she’s also a wife and mother.

“I take on as many different tasks as possible – I just can’t sit still,” Chauhan jokes. “The restaurant (Chauhan Ale & Masala House) opens at the end of August, so right now it’s the last-minute craziness that goes into opening a restaurant.”  Her days are currently spent finalizing menus and making sure the house team is in place, on top of flying back and forth from New York – where Chauhan lives with her family – to Nashville, where the restaurant is opening. “It’s gaining us lots and lots of frequent flyer miles,” she laughs. “But this crazy, chaotic creation is very exciting.”

An upscale Indian restaurant in Nashville might sound a bit out-of-place to those out of the loop, but the country music capital has a ripening culinary scene.  “It’s filled with all these young chefs excited to make their own masterpiece, and no one’s jaded. Last year, in Bon Appetit Magazine’s Top 50 Restaurants, number three was from Nashville, so it’s getting on the national [foodie] scene.”

Though, Chauhan admits that, originally, she was thrown off by Nashville as well.  “But then it was love at first visit. It’s such a friendly city – southern hospitality can be found on every corner.  I joke that even the TSA agents are nice!”

With a love of food going back as far as she can remember, it’s almost shocking that Masala House will be her very first restaurant.  According to the thirty-seven year old, her parents joke that she was born with a ladle in hand.  Her hometown – a melting pot of different Indian cultures and cuisines – helped foster her culinary education.  “I was that kid who would eat dinner at home, then go to my neighbors and tell them that my mom didn’t cook and they’d feed me,” says the chef.  “I was the perpetual ‘why’ kid; I’d watch them cook and ask why’d they use that spice, or why that oil.”

Her career as a chef officially began once her older sister went away to school and Chauhan would bring her food. “I became the most popular kid on campus because everyone wanted to eat what I made. It dawned on me – why not do to it for a career?”

Today, it’s important to both Chauhan and her husband that their three-year old daughter experience home-cooked Indian food. “We try our best to cook at home for her.” However, the chef prefers to let her husband do most of the family cooking. “It de-stresses him.”

As a high-profile female chef, Chauhan says she faced her biggest career challenge after her daughter was born.  “Learning to balance life and career without getting lost being just someone’s wife or mom is the toughest thing to do.  Especially in this industry, where you have to throw yourself into it, whether you’re a man or a woman. But if you love what you’re doing, and stay true to yourself, you’ll figure out how to do everything.  I won’t say ‘balance’ because there’s no balance in life, but you figure it out, and make the best of it.”

For Chauhan, figuring it out means taking her daughter with her. “She’s come with me to an event I did in Costa Rica.  I brought her with me to the White House, where she came on stage with me.  It’s interesting to see her personality developing accordingly.”  The White House event happened this past April, when Michelle Obama invited Chauhan to the 2014 Easter Egg Roll.

With all the fanfare, it’s possible that some of the fame has gone to Chauhan’s head, but the Chopped judge believes she’s incredibly fortunate for all that she has. “Growing up as a girl in India, there’s a lot of ‘you’re a girl, so you can’t do this,’ but I was so lucky to have parents to say ‘you can do whatever you want.’  I’ve had so many highlights throughout my career.”  Naturally, one of those highlights is being a part of a successful show like Chopped.

“It’s an acknowledgement that you’ve reached a certain stage as a professional,” says Chauhan, who began her judging career several years ago as a guest judge.  After the season ended, the producers asked her to join the cast full-time. “It’s also an honor to represent a cuisine that has been so under- and mis-represented.” 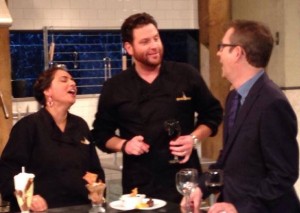 Like any creative person, Chauhan finds inspiration in everyone and everything, including her co-judges Amanda Freitag and Alex Guarnaschelli, as well as the show’s contestants.  In her opinion, working as a judge has surely influenced her own cooking.  As she notes: “If it has not been directly, then certainly subconsciously — be it an ingredient I’ve never used, or what people do with their baskets.  There are very interesting ideas happening on the show.”

Though Chauhan admits that she has connected to many of the Chopped contestants’ stories, she is adamant that the judging must always come down to the food.  “Each and every person has a wonderful story, but at the end of the day, it’s about the food, not the story.  It’s broken my heart to chop some people, but that’s why there are three of us.” Chauhan remembers that it was judges Chris Santos and Scott Conant – both of whom she adores – who coached her through her first episode, emphasizing that it was the food that mattered most.

But that hasn’t stopped her from helping former Chopped competitors when she can.  In fact, one woman, Mia – a mother from a Mother’s Day episode whose daughter had cerebral palsy – reached out to her afterwards.  “I was listening to her story, and crying because my nephew was just diagnosed with CP, but we had to chop her because someone else’s food was better.”  Chauhan says she was happy to hear back from the mother and then to connect her with more resources.

The recurring question that Chauhan receives is whether or not she’ll slow down now that she’s a mother.  Her response?  A resounding “No!  I have to do more now!” as she exclaims. “I’m the role model my daughter has to look up to.  It’s my job to show her that whatever she wants to do, she can achieve.  And yes, there will be obstacles, but you can push past them.”

Catch Chauhan and the rest of the Chopped crew Tuesday nights at 10/9 central on The Food Network.