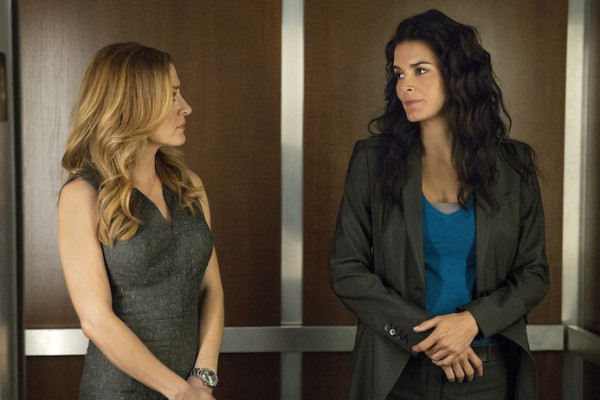 The Wait is Over as Female-Driven Dramedy, Rizzoli & Isles, Returns to TNT

Last night, crime-fighting fans rejoiced! After a much-awaited break – five months, but who’s counting? – the second half of Rizzoli & Isles season five returned to TNT. Fans, hanging on a cliff since September 2, tuned in to find out what happened to Detective Jane Rizzoli after she jumped off of a bridge in an attempt to rescue Paul Westcourt, a prosecutor suspected of murder. 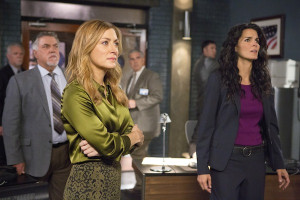 Without skipping a beat, last night’s showing brought us back to the bridge where, in sunlight Maura Isles (Sasha Alexander) and Detective Frankie Rizzoli pace nervously, waiting for any update on Jane (Angie Harmon). Of course, since our favorite tomboy detective is also a powerful swimmer and islands are just off the coast of where she jumped, she’s soon brought in on a boat – along with the man she rescued. After a few scenes of tense interrelationships – Maura is understandably upset that Jane would jump without any forethought of her friends and family – the show quickly found its normal tongue-in-cheek humor with just the right amount of whodunnit suspense.

The first half of the current season, which aired the first 12 episodes last summer, saw a slight change in the show’s tone. The start of the season was marred by the unfortunate and untimely death of co-star Lee Thompson Young, aka Detective Barry Frost, which made for a darker plot line than usually found on this quirky cop series. But the emotional rollercoaster didn’t end there. Jane, who learned she was pregnant at the end of season four, lost the baby in episode eight after another brush with death while on the job.

Aside from more somber storylines, another shake up happened behind the camera. After production on season four wrapped, the show’s creator and showrunner, Janet Tamaro, stepped down. Though she remained on the sidelines for the current season as a consulting producer, Tamro’s departure left many wondering just who could fill her shoes. The TV version of Rizzoli & Isles has been the writer’s star project since 2010, specifically since she was the one who developed the show based off Tess Gerritsen’s best-selling crime thrillers.

A long-time writer and producer for some of TV’s most-loved shows –including Bones, CSI: New York, and Law and Order: SVU – Tamaro told Variety she left Rizzoli & Isles in order to focus on new, female-driven projects. Unfortunately, whatever it is she’s currently working on remains under tight wrap. 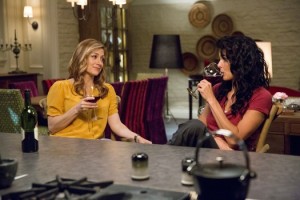 Keeping inline with Rizzoli & Isles‘ strong female focus both in front and behind the camera, TNT announced in November of 2013 that Jan Nash would replace Tamaro as the executive producer, writer and showrunner for season five. Though Nash is no stranger to procedural crime dramas – she’s worked on Without a Trace, Fairly Legal, and TNT’s Memphis Beat – she most certainly joined the Rizzoli & Isles crew at a difficult time. Upon her arrival, the cast was still deeply affected by the loss of Young and in the throws of grieving. Despite the challenges, Nash managed to pull in 7.6 million viewers in Live + 7  (meaning live viewing plus DVR recordings) during the summer episodes, and will continue on in the position.

Season five also marked a shift in the number of episodes aired per season. For the past four years, Rizzoli & Isles has had orders for 10, 15, and 16 episode-runs; this season the show has 18 episodes to complete the story arc. In December, after a prolonged negotiation period, TNT officially renewed the best friend crime dramadey for a sixth (and possibly seventh) season. With the complicated negotiations behind them, season six  began filming in Los Angeles just last week. And though viewers are currently rejoicing in the mid-season return, season six will premier on TNT this June and will continue with the current 18-episode format.

As TNT’s flagship series, Rizzoli & Isles is the network’s second most-watched show (The Closer, also featuring a strong female lead, ranks number one), and was named the most watched basic cable series of summer 2014. The decision to order several additional episodes per season only makes sense, as more and more fans are tuning in each week. In fact, if social media numbers can give us an idea of just how many fans these bffs have, then the show’s Facebook page has more than 1,415,600 likes, and their Twitter account has approximately 106K followers. Yesterday, within a half an hour of posting a countdown photo to their Facebook, the picture received more than 4,980 likes and 590 shares.

Before last night’s mid-season premier aired, TNT dedicated Tuesday’s programming to a season five marathon of Rizzoli & Isles. And – in the blissful union of TV and social media – Nash, Alexander and several other writers and cast members logged into Twitter to live-tweet the east coast premier.

For now, fans can expect five additional episodes, airing weekly on Tuesday nights now through March 24. With the following season coming this summer.