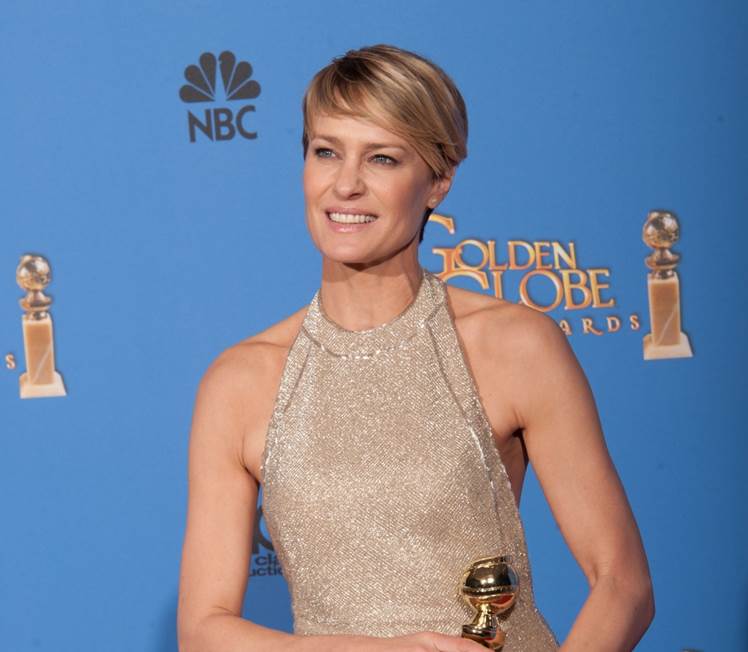 ‘Tis the season of award shows. With the Golden Globes kicking off the festivities on January 12, and Saturday’s Screen Actors Guild Awards, the years brightest and best are out in full swing. And we can’t help but notice that some of our favorite female celebrities are being honored round the clock right now. 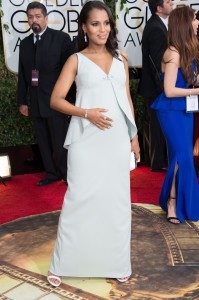 Most notably – at the Golden Globes – were the nominees, and winner, for Best Performance by an Actress in a Drama Series. Several of our beloved leading ladies, including Julianna Margulies, Kerry Washington, and Robin Wright were among the nominees. Other Netflix contender, Taylor Schilling (Orange is the New Black), and Orphan Black’s Tatiana Maslany rounded out the five contenders. But it was Wright who walked away with the statue, making her role as Claire Underwood in House of Cards the first Golden Globe win for Netflix.

Though up against a talented group, the recently engaged actress just might have been the only one surprised by her win. Wright’s short, unprepared speech was both endearing and insightful. In thanking House of Cards director, David Fincher, for convincing her take on the role, she admits that he not only allowed Wright to create Claire, he also suggested she could let the character “come out of marble” if she wanted. Stone is, in fact, Wright’s inspiration for television’s strongest leading lady.

Jumping from small to big screen, as the Golden Globes do, American Hustle officially became one of the most talked about films of 2013. While the men of Hustle received nominations [at both the Globes and Oscars], it was the ladies of the film – Amy Adams and Jennifer Lawrence – who won the Golden Globes. The movie also landed Best Motion Picture in the comedy/musical category. Though neither actress took home a SAG [Lawrence was the only actor from American Hustle to receive a spotlight nomination], the cast, as a whole, won for Outstanding Performance.

As announced last week, American Hustle has been nominated for ten Academy Awards, including best actress in a lead role (Adams) and actress in a supporting role (Lawrence). The seventies era, con movie is also up for Best Picture, alongside Spike Jonze’s HER. And these two nominees are discreetly making history, in part because they share a produce. Megan Ellison, founder of Annapurna Pictures (The Master, Zero Dark Thirty), is part of both movies’ production teams. With Hustle and Her in the running, Ellison has become the first woman to receive two best picture nods in the same year.

Taking cues from the SAGs, Lupita Nyong’o is the other actress to watch out for during the Oscars. Nyong’o, of Steve McQueen’s 12 Years a Slave, beat out Lawrence Saturday night for Outstanding Female Actress in a Supporting Role.

However, the highlight of this year’s SAG Awards was the 50th Life Achievement recipient. The 82-year-young, Rita Moreno, most famously known for playing Anita in 1961’s West Side Story, won the award. The honor seems exceptional because, like the entire awards show, SAG winners are chosen from within the actors’ community. The Puerto Rico-born, New-York raised actress began working in the entertainment industry when she was 13. Moreno has also been a voice for race and gender equality ever since her involvement with the Civil Rights Movement.

“I’m so bloodly happy,” announced Moreno upon reaching the stage. She then apologized for using “that” word, and followed the apology with: “Actually, I’m not sorry.” Moreno than sang a beautiful couple of verses, making her acceptance speech the night’s hallmark event, and no, we’re not talking about the card company.

But it’s not just the nominees and victors causing conversations, it’s also the hosts. Some of comedy’s biggest names, and funniest women, are playing the hosting game. By now it’s old news that Tina Fey and Amy Poehler cohosted the Golden Globes, marking their two year anniversary at the ceremony. However, this year’s show brought in 20.9 million Americans, and upped the ratings ante so much that the pair have already been signed on as the 2015 hosts. 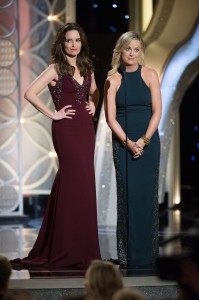 Coincidentally, Poehler had to take a short break from presenting to accept the award for Best Performance by an Actress in a Comedy Television Series for her role in NBC’s Parks and Recreation. Poehler celebrated her first win by lip-locking Bono (yes, of U2) before giving her – like Wright’s – unprepared acceptance speech.

And it doesn’t end with these two talented ladies. Ellen Degeneres is up to bat next as she returns to host this year’s Oscars. It’s been seven years since the last time Degeneres emcee’d the awards show, but her return has been long overdue. The president of ABC Entertainment Group, Paul Lee, says it best: “It is an honor to welcome back Ellen DeGeneres as the host of the biggest entertainment celebration of the year. She is the consummate entertainer, equally beloved by her peers in the industry, movie fans and television viewers. We very much look forward to having her back on ABC for Oscar Sunday.”

Degeneres, who was recently compared to Oprah in a New York Times article, received an Emmy nomination for Outstanding Individual Performance in a Variety or Music Program, in 2007 after her first run hosting the event.

For those making bets on the 2014 Oscar winners, it’s been said that the SAG Awards offer a more telling guide than their Golden Globes counterparts. But, regardless of the winners, history is looking to be made. Don’t miss a minute of the groundbreaking Academy Awards on March 2.