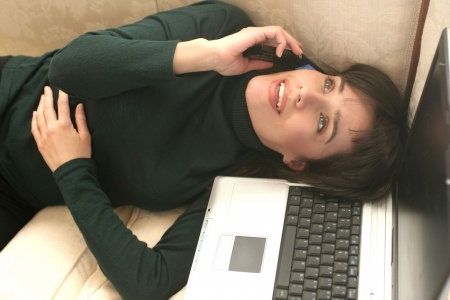 The Working Woman’s Guide to the Online Commitment Phobe

What happened? Why hasn’t he called? Was he even interested? Did he die?

While you lay awake perusing his old text messages after a long day at the office and reminiscing about his quick pursuit, the Online Commitment Phobe was mentally packing his bags just as he approached your dating profile page.

Whether a matter of hours, days or weeks, this guy suddenly stops calling or ceases to exist without any notice – sometimes before you ever got a chance to see his two faces in person! Unfortunately, this guy simply lacks respect and empathy for women and others in general. He is a classic Commitment Phobe, and the last person you need to deal with in your already busy life.

But let’s take a look at how all of this began.

Being the career woman that you are, it took months of coercion from your friends to “get out there” in the dating world. Finally, you reluctantly sign up for the hippest new matchmaking site, create a profile page and upload your cutest photos, all the while gripping a bottle of pinot grigio. A few days later, some handsome lad pops up on your page, sends out a wink and sparks up a conversation. Curiosity sets in and you hesitantly click on his profile:

I am college graduate and I am looking forward to opening my own company soon. I live just outside the city. I am a real guy looking for a real girl to settle down and share my life with. She must love dogs because my German Shepard, Frank, can sense if you don’t. LOL. I like sushi, playing guitar, long hikes, game night, watching old Glee episodes (guilty pleasure, I’m straight I swear!), cooking pasta and working out (I am in great shape, but you will know that when you see me :). I just want to find my soul mate and travel the world. Maybe we are a match?

Willing to look past his name, bad grammar, the LOL, and the 20 mile drive, you wink back and – putting your own intellect aside – send a note that reads: I like dogs, as long as they don’t bite lol! You hit it off like gangbusters and the first date is set for the following Wednesday. In the meantime, the texts get more and more flirtatious and you’re feeling like this could maybe possibly be it! But, you play it cool, and don’t lose perspective just yet. LOL.

Wednesday comes around and you meet him at the restaurant where he looks a little worse than his picture, but since you had decided on the car ride over not to be judgmental, you let it slide. He’s still cute though, and the conversation flowed…and flowed…and flowed. Was this for real?

Five hours later and still laughing it up, you’re already mentally testing out his last name after your first. A long kiss good night seals the deal and he tells you he will call you tomorrow. You drive home, giggling all the way to your bedroom and name your first child before drifting off into a dreamless sleep.

The following day, you awaken to songs from the musical, Annie playing in your head as the full-fat cream slides into your coffee cup. That day at work, you’re on cloud nine as you anticipate his impending phone call. But the day goes by and – nothing. The week goes by and still nothing. After a month, you pack up your imaginary children and catch the first flight off Cloud Nine.

The truth is that while you may never know what really happened, you can be certain this guy had commitment issues. He could have been married, engaged, a masochist or a complete narcissist. Perhaps his deflating ego needed a boost.

The Online Commitment Phobe may truly believe that he wants marriage, commitment and lasting love. He has no idea that he is his own worst enemy, attempting to sabotage the independent woman who comes his way. This guy does not know he has a fear-based problem, and instead, he categorizes himself as picky and too busy to bother.

In the midst of business meetings and data analysis, if you’ve found yourself scratching your head over what went wrong – stop right there. There was no way you could have seen this one coming. Instead, try to look at it this way – you have been spared the agony of getting involved with a man who simply can’t decide what he wants for breakfast. After all, you are career-minded, business savvy, independent and far too intelligent to deal with the Melvin’s of the world!

Relationship Expert and Author of the newly published “ The Commitment Phobe”.
READ MORE BY Emily Wilcox