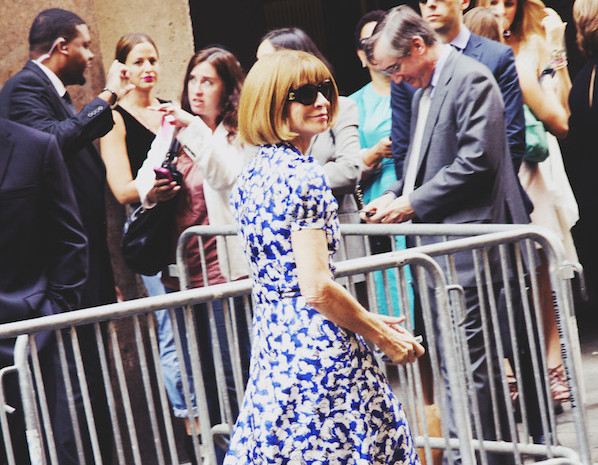 A Lifetime of Achievements

Monday night, after the Thanksgiving gravy has settled, America’s most fashionable editor-in-chief will be honored at the 2014 British Fashion Awards. Anna Wintour, the woman who has kept Vogue Magazine ticking for the past 29 years, will take home the night’s grandest honor – the Outstanding Achievement Award.

Wintour, who’s a native Londoner, has been in the fashion magazine business for nearly 45 years. And though she’s earned herself a few not so nice nicknames, the editor has become one of the fashion industry’s most valuable assets. Many would argue, that she is, in fact, the most powerful woman in the fashion world. 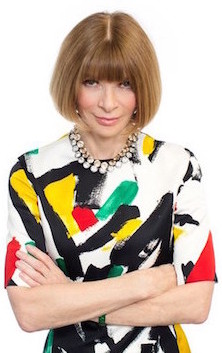 Since accepting her current position at American Vogue in 1988, Wintour has managed to revamp the magazine, saving it from decline in the late eighties, and henceforth keeping it the country’s most prestigious print fashion source. With a socialite’s eye for pop culture, Wintour quickly ended the reign of supermodels, and, instead, decided to feature celebrities for her cover models. As editor-in-chief, she oversees all visual content with a strict eye, and has even stricter rules about what gets published. Photographers are required to get her approval on photo shoot setups and outfits before starting, and afterwards they must send the shoot’s entire inventory for her approval. In that way, Vogue has continued to thrive despite the dying off of print publications.

In March of 2013, Wintour took on an additional title – the Artistic Director of Condé Nast. The mass media company responsible for the publication of Vogue, Vanity Fair, Allure, GQ, and W to name a few, promoted Wintour to this position due to both her remarkable vision and her remarkable power. “In today’s business environment, it is critical to promote and foster our established creative authority,” said Charles H. Townsend, Condé Nast’s chief executive officer, in last year’s press release.

“This is the ideal time to leverage Anna’s extraordinary vision and leadership to amplify and elevate the profile of Condé Nast U.S. both domestically and abroad. Anna is an icon in the worlds of fashion, business and the arts, she has the foresight and wisdom to influence the major trends of our society and is respected globally as an accomplished businesswoman.”

By the end of last year, Condé Nast managed to increase their print advertising by 3.3 percent across the board, and by 28 percent in the digital realm. Today, Vogue alone boasts 991,977 subscriptions, and a total average circulation of 1,259,826. In July, Forbes listed Wintour at number 39 on their Powerful Women list of 2014.

Aside from the business aspects of Wintour’s iconic career, she’s also aided the world of fashion in other ways. In part, she is responsible for helping to launch the career of many well-respected designers. In the early nineties she assisted John Galliano’s fledgling career, offering him backing when few cared about the unknown designer. Both Alexander McQueen and Marc Jacobs’ careers were strengthened by Wintour’s helping hand. And in 2006, the editor-in-chief helped starting out designer, Thom Browne connect with Brooks Brothers. Today, his line within the classic clothing store, Black Fleece, has become so successful that – with Brooks Bothers – they’ve opened a brick-and-mortar location in New York’s West Village.

“Anna has such an influential hand in fashion, she cares about, and pioneers creativity. Her love and contribution to British fashion is truly outstanding and I am ever grateful for all the support she has given me,” Sarah Burton OBE, the creative director of Alexander McQueen, summed up in the BFA’s press release.

Though she carries with her a quite brazen reputation – everyone knows who The Devil Wears Prada really was – Wintour does use her powers for good. Wielding talent, connections and a keen business-sense, she has spearheaded numerous fundraising campaigns for both AIDS research and the Metropolitan Museum of Art – which, coincidentally, is her favorite museum. 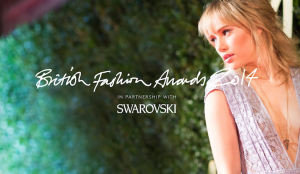 In helping fight the spread of HIV, Wintour encouraged the Council of Fashion Designers of America to create the he CFDA-Vogue Initiative for HIV and AIDS in 1990. The initiative raised over $20 million to help fight AIDS and fund research. Earlier this year, she once again focused her attention on the deadly epidemic, this time by “spearheaded the fashion industry’s involvement in Born Free Africa – an organization aiming to eliminate mother-to-child transmission of HIV by the end of 2015.” The funds for Born Free Africa will come from a clothing line designed by well-respected fashion designers who are also mothers.

In fashion, Wintour has also worked tirelessly to improve and buffer the industry. In 2009 she – along with Vogue and the CFDA – masterminded Fashion’s Night Out. The night of fashion and celebrity was an attempt to restore shopping and foot traffic to retailers who were suffering in the throws of the most recent recession. The night lasted for four consecutive years in New York, though it still continues in select cities, including London.

From her days starting out days at Harpers & Queen, to Home and Garden (or, HG as she rebranded it), and British Vogue, to her current position at American Vogue and Condé Nast, Wintour has become an inspiration to all women. For her global contribution to fashion, the UK has give Wintour the letters OBE, or Order of British Empire. Though OBE is the most common letters, the title is part of the British honors system. 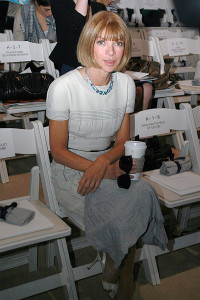 An editor, businesswoman, philanthropist, mother, friend and icon – [the BFA] award recognizes and celebrates her extraordinary contribution to the global fashion industry and to popular culture,” said chairman of the British Fashion Council, Natalie Massenet MBE. “Anna is the creative industry ambassador and a great friend to the British fashion industry, which has benefited from her incredible support […] As one of Britain’s most successful exports, it is fitting to celebrate Anna Wintour’s lifetime of achievement in London.”

A lover of Starbucks, necklaces, and Hugh Jackman, Wintour will accept her Outstanding Achievement Award during the British Fashion Awards ceremony on Monday, December 1. Her designer protégé, John Galliano, is rumored to be the one presenting her with the honor.

According to the BFAs PR Assistant, Will Iron, the Outstanding Achievement Award was created in 2004. Since it’s inception, the BFA’s have “honored such luminaries as David Bailey, Suzy Menkes OBE, Dame Vivienne Westwood, Stephen Jones, Manolo Blahnik CBE and Terry and Tricia Jones.” The BFAs, however, began in 1989, in order to celebrate the contributions of British designers and models who have changed the world of fashion.