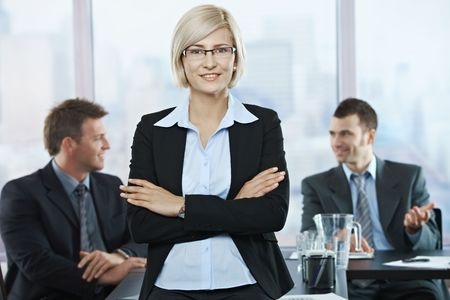 Raise the Percentage of Women on Corporate Boards in the U.S. to 20% or Greater by the Year 2020

Do you know what percent of the seats on corporate boards that women currently hold?  Did we stump you?  You are not alone.  Most people are unaware of the disparity between the number of women in the workforce and their representation on corporate boards.

“In 2013, the 2020 Women on Boards Gender Diversity Index of Fortune 1000 companies showed that only 16.6% of corporate directors were women. This is a small number when you consider that: women comprise about half of the total U.S. workforce; hold half of all management positions; are responsible for almost 80% of all consumer spending; and account for 10 million majority-owned, privately-held firms in the U.S., employing over 13 million people and generating over $1.9 trillion in sales.” (2020WomenOnBoards) 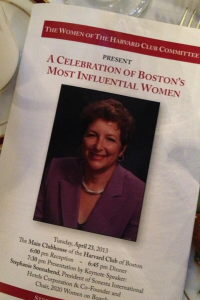 Stephanie Sonnabend, chair and co-founder of 2020 Women on Boards, knows that diversity is essential for successful boards, and she has made it her mission to educate others.

Mission: “To increase the percentage of women on U.S. company boards to 20% or greater by the year 2020. Diversity of thought is essential to good corporate governance. The best boards harvest diverse experience, skills, and perspective to obtain optimal decisions. These boards create better shareholder value.”

Guiding Principles: “We practice what we preach.  We are change agents. We are believers. We will meet – and exceed our goal. Together we can make it happen!”

Sonnabend is the former CEO of Sonesta International Hotels Corporation, a 35-year veteran of the hospitality industry and recognized as one of Boston’s most influential women.  She currently sits on the Board of Directors of Century Bank and Trust, and Century Bancorp, where she is a member of the Audit Committee and chairs the Asset Liability Committee.  In Sonnabend’s experience, people of different backgrounds bring different perspectives to an executive board. “Placing women on boards is a sound business decision,” she said, citing that a number of studies have shown that companies with women on their boards are more profitable and have higher shareholder value.

Catalyst.org’s recent report, The Bottom Line: Corporate Performance and Women’s Representation on Boards, stated that Fortune 500 companies with higher numbers of female board directors had higher financial performance than their counterparts with lower female representation on their boards. Essentially, women on boards are good for the bottom line. After all, the board of directors represents the stakeholders:  the investors, the consumers, and the employees.  Women are responsible for over 80% of all purchases; their representation on boards should mirror their stake.

Sonnabend has “always been interested in boards and was dismayed by the lack of progress women were making in the boardroom.”  She realized the campaign to place more women on boards lacked four key elements:

A Definition of Diversity. With no clear definition of diversity, companies would add one woman and think they had handled diversity.  2020 Women on Boards established a baseline of 20% of women on boards, or 2-4 women on every board.

Goals. There was no goal behind which to rally the troops, therefore Sonnabend established a goal to reach 20% female participation on boards by the year 2020.

Transparency. Despite the fact it was public information, oftentimes you had to dig deep to find out the gender composition of a board. To address the issue, 2020 Women on Boards created a directory of companies, ranked by the number of women on their boards.

Visibility of this Issue. “The fact remains that most people do not know what an executive board does, let alone what the diversity is, even of the companies they work for,” Sonnabend said. “We wanted to make this a grass-roots issue so that companies could not imagine not having women in their boards and that stake holders, whether they are customers, investors or employees will help educate those boards on the value of diversity and help advocate for change.”

They have modeled their approach on the “green” movement for environmental consciousness. Sonnabend said, “The environmental movement was around for 40 years, and it wasn’t until people started asking companies what they were doing to help the environment that companies were willing to step forward and look at that issue.” She believes that gaining visibility for women on boards will “create a tipping point for change.”

When asked what has been the greatest impediment to gaining women seats on executive boards, Sonnabend said, “As a campaign, we don’t have strong opposition. We don’t have any group getting up there and saying, ‘No, I am in favor of all male boards and I want to keep women off boards.” Lacking controversy and opposition, there isn’t much dialogue and discussion. There is no congressional fist fight to create media frenzy. “The real oppositions to 2020 Women on Boards are apathy and inertia,” Sonnabend acknowledged, “apathy because it’s not an issue people know to care about and inertia because boards tend to like to maintain the status quo.”

It is up to women, therefore, to learn about executive boards, to tell others about the goals of 2020 Women on Boards and to use the means available to us to compel more people to listen.  Women must answer the call to action by…

Joining the campaign at www.2020wob.com. It’s easy and free.

Attending one of their events around the country like their annual event in November 2014.

Using their voices and their proxy votes. Investors should be very careful how they vote their proxy. Vote against all male boards. Sonnabend said, “If you see that a board for a company in which you invest is an all-male board, you should vote ‘No’ to that proxy.” She recommends women write a letter or send an email indicating that they do not support an all-male board. If they see that there is only one woman on that board, then vote only for that woman. Women must exercise their power to influence the structure of corporate boards.

Women who desire to sit on executive boards should understand the process and the leadership experiences needed by an executive board.  Sonnabend said that, of course, “It’s really important to be qualified, so you have something to offer them. The simplest route (to be asked to sit on a board) is to be the CEO of a public company, as those people are most often the ones asked to sit on the board of directors of another company.” Executive boards seeking members for their auditing committee, for example, might look for either a CFO or CEO, as either would be qualified for that role because they have P & L experience. CIOs are desireable for their technological expertise. Sometimes boards also seek industry-specific knowledge or some other level of expertise, such as social media expertise, technology security expertise, or global experience.

Whether or not your personal goal is to attain a seat on the board of a public company, you can and should get behind the 2020 Women on Boards movement. After all, not so long ago women couldn’t vote or own property, but collective voices made the issues known and changed the status quo. We can do this. Get on board.

9
TAGS:  WiB women in the workplace