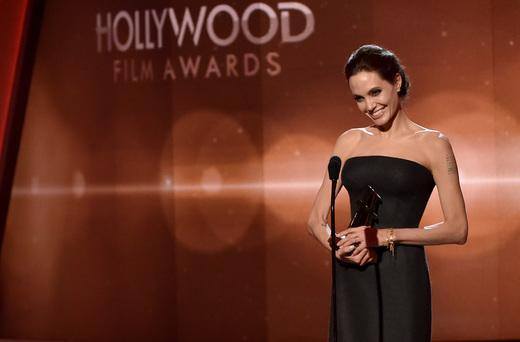 Electric Ladies of the HFA

The Women Who Stole the Hollywood Film Awards

For the first time since it’s creation 18 years ago, the Hollywood Film Awards aired Friday night on CBS. The show that has dubbed itself the award season kick off, was hosted by Queen Latifah and was attended by the most famous (and popular) faces in Hollywood this year.

Though it was a tame two hours – maybe because the stars were adjusting to having their usually private party televised – we couldn’t help noticing that the HFA’s honored some of the industry’s most inspiring women. From Queen Latifah, to the winning actresses, and films  – such as Gone Girl – that were backed by female talent, the night managed to celebrate some truly deserving women. 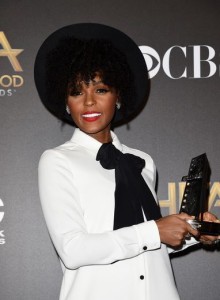 Avant-garde R&B singer-songwriter, Janelle Monáe, not only received the Best Song Award for Rio 2’s feature song, “What Is Love,” she was also the night’s only performer. During a red-carpet interview, Monáe, who voiced the Rio character, Dr. Monae, admitted that she would continue to pursue acting, as well as music.

“One of my ultimate goals, is to be respected that way – in the film industry,” said the singer, referring to her Hollywood role models, including Steven Spielberg, George Lucas, and Johnny Deep. “And inspire others along the way. Especially young women.” Throughout her career, Monáe has used her voice to advocate women advancements in the arts, and elsewhere. Her work has earned her Harvard College Women’s Center’s Award for Achievement in Arts and Media. Harvard gave Monáe their inaugural award for both her art and advocacy work. Friday marked her first HFA award.

Though the show had limited performances, music conversation wasn’t lacking. In a pre-show chat from the red carpet with Gayle King, Latifah announced that she’d listened to some Jennifer Hudson while getting ready in her trailer. The music had left her cheerful and ready to host the ceremony. Of course, this wasn’t Latifah’s first time hosting an award show – in 2005, she both performed and hosted the 47th Annual Grammy Awards.

After 25 years in the entertainment industry, Queen Latifah has become the definition of Renaissance woman. At the age of 19, she entered the entertainment industry with the release of her first album, All Hail the Queen. Five years later, she took home her first Grammy and has hence received another half-dozen nominations for her music. In 1991, Latifah lent her talent to the silver screen. As an actress, she has been nominated for an Academy Awards, Golden Globes, and Screen Actors Guild. For her role in 2002’s Chicago she won the BET Best Actress Award.

Several days before the HFAs, the 44-year old talent seemed truly excited for the awards show, exclaiming in an interview with CBS This Morning that the awards would “set off the season” and be both “irreverent and fun.”

Unlike other award shows, HFA’s are given out to leaders in specific categories, including Best Director, Ensemble Cast, Animation, and Screenwriter, to name a few. However, this ceremony doesn’t waste time on nominees. With the categories in mind, a committee of a dozen industry leaders chooses the 18 winners. This prelude to award season also stands alone by honoring films from throughout 2014 – including ones that have yet to premier. 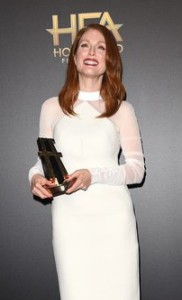 For instance, Julianne Moore was honored with the Hollywood Actress award for her role in Still Alice. However, the film, co-starring Kristen Stewart, will not be released until January 16 (save a “qualifying run” for the week of December 5 in New York and LA). It is one of several films honored at the ceremony that have yet to reach theaters.

However, for Moore, Friday’s win has only garnered more anticipation for a 2015 Oscar nomination for the leading lady. In the film, based off Lisa Genova’s novel, Moore plays Alice Howland, a linguistics professor who is diagnosed with early onset Alzheimer’s. In her speech, Moore referred to the role as a “gift.”

Over the course of her career, Moore has become one of the generation’s greatest actresses. “Spending five minutes in her presence is a gift for anyone who’d like to call themselves an actor,” Stewart. “It is my pleasure to present the Hollywood Actress Award to my onscreen mom, my mentor and my friend, Julianne Moore.”

Keira Knightly received the Supporting Actress Award for her role in Imitation Game as the World War II code breaker, Joan Clark. Knightly graciously accepted the honor, and after thanking her cast-mates and directors, praised Clark for her remarkable work in ending WWII. “Joan Clark was an inspiring woman, and she was a joy to play. I think, particularly now when women are such a minority in all fields, her story and the fact that she really persevere sand that she had space and time and grace is really inspiring. Thank you so much for this award, and thank you for letting me play her.”

David Fincher’s Gone Girl received the Hollywood Film Award, the HFA’s biggest honor. Though star Ben Affleck accepted the award on behalf of cast and crew, let us not forget that the film is based off Gillian Flynn’s novel of the same name. Already an Oscar heavyweight, this was one of several films to take home multiple awards, including one specifically for Flynn: Hollywood Screenwriter.

Flynn, who joked about the combination of the awards’ open bar and wearing heels, accepted the award presented to her by Hilary Swank. The honoree thanked both her parents –her mother was also her date for the evening – for teaching her that it was important to tell stories. She also thanked the Fincher for, among many things, “believing that the author could write the screenplay.”

Though Flynn has received a handful of book awards – Gone Girl is her third novel – Friday night’s win was her first in the realm of movies. Ron Howard, who presented the night’s grand award, referred to the film as having it all. “A superb cast, wonderful direction, an unforgettable story.”

Among other ladies taking home the HFA statue was Fault in Our Stars actress, Shailene Woodley who was honored with the Hollywood Breakout Performance; and Chinese actress Jing Tian, who won the Hollywood International Award.

Photos courtesy of The Queen Latifah Show, and Hollywood Awards