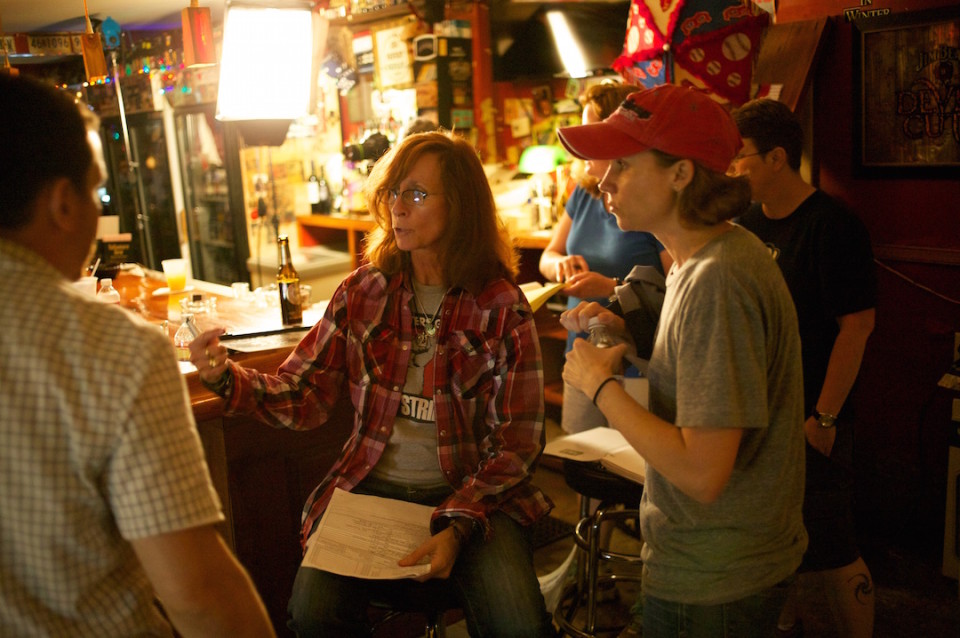 Christin Baker co-created Tello Films in 2007 with two goals in mind: invent original content for the lesbian and queer community, and give women filmmakers a platform for their work. 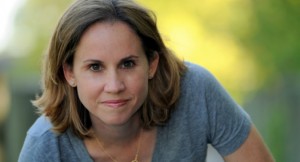 Originally pegged as “YouTube for Lesbian Content,” Baker’s subscription-based, online streaming site has morphed into something like a constantly evolving entertainment hub for gay women. After a humble start – Baker admits to having a consultant job on the side – nowadays Tello offers fifteen original series, a worldwide audience, and 3,000 to 4,000 subscribers at any given time.

Baker’s love for the entertainment industry began as a teenager in her hometown of Nashville. Using her parent’s VHS camcorder, she created her first original films. However, her first professional endeavor was in the television production field as a college student at Middle Tennessee State University. She explains how, while the world of news broadcasting left her unenthused, her other summer internship held the answer: “I spent some time on a movie set and fell in love with it. That internship took me into single camera production. Non-linear editing was just becoming a thing, and I wanted to learn all I could about it.”

After graduating, the hopeful filmmaker packed up her belongings and headed to Los Angeles – “where all good entertainers go,” she jokes. After several years of internships, behind the scenes jobs, and her own indie projects, she says the unthinkable happened.

“I just got burnt out,” she confesses. Though she never lost her love of film, Baker took a break from Hollywood. During that time she explored the non-profit world with a job at The YMCA, but she couldn’t stop filmmaking all together. “I ended up making videos for The Y – commercials, fundraising clips – you name it.”

As luck would have it, however, Baker couldn’t help but notice the ever-growing success of YouTube. “I realized that the web was becoming an interesting space for non-traditional entertainment, and wanted to explore it.” The drive quickly led her to her co-founder, Nicole Valentine, and together they created Tello.

“Our focus has always been to make series distributed over the web, specifically for a lesbian audience,” explains Baker. Why this particular audience? “I did it because it’s stuff that I like to watch. I’ve put my own money into the company – it had to be something I wanted to watch. Because, at the end of the day, if you’re putting your free time, money, blood, sweat and tears into something, you’d better be passionate about it.”

After a pause, Baker admits to a second reason: the lack of television shows or Hollywood films that feature lesbians as main characters. “The L Word was great to have, and now there are shows that are trying.” She names ABC’s The Fosters, Netflix’s Orange is the New Black, Amazon’s Transparent and BBC America’s Orphan Black as examples. “But here’s the thing: those shows will eventually get canceled like The L Word. On the other hand, we have new content all the time.”

Tello’s fifteen series are an amalgamation of original content and work that’s pitched to Tello for production and/or distribution. Aside from Baker, Tello’s two other full-time staffers, Julie Keck and Jessica King, are responsible for writing, directing and producing many of the web channel’s stories. Nancylee Myatt, creator of the web series, Nikki & Nora, is just one of the women filmmakers who has found a platform on Baker’s site. “She was actually the first person I went to after talking about original content,” Baker says referring to Myatt. “I just called her and said we have a chunk of change left — let’s make something.”

The Next Big Thing

2010 was a milestone year for Tello. King and Keck joined the Tello team as content providers. With their help, Baker’s site really began to thrive. “Jess has been an amazing shooter and writer, and Julie takes on most of the communication with providers, social media, and does the majority of writing for the site. They’ve been great.”

That same year, the channel moved towards a subscription-based model, despite Baker’s original goal to create revenue on advertising alone. Though they lasted for three years on AdWords (and angel investors), the money just wasn’t coming in.

“It didn’t happen,” says Baker. “I remember thinking if just three lesbians could just give me $3.99 each month, that would be more than we were getting. To survive, we had to switch.”

Baker also made the decision to not “geo-block” content on her site — meaning, people from all over the world can log in and subscribe to Tello. Approximately thirty to thirty-five percent of the channel’s audience currently lives outside of the U.S. Although one of Baker’s dreams is to eventually have enough funds to support translating the site’s series, for now international viewers can watch the content using subtitles.

The Woman Behind the Channel 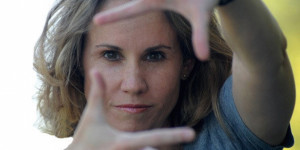 Upon Googling Baker, nearly half a dozen titles appear alongside her name. Unsurprisingly, the producer, director, writer and CEO admits, “I’m never not working.” But she’s not complaining. “I’m also fine with that. And I can work from anywhere I want – I don’t have some office to go to. That’s the tradeoff.”

Among her roles, it’s the CEO who’s always required to be on. “As an independent business owner, you just have to do everything. I’m lucky to have Jess and Julie today, because at the very beginning I was the tech person and the submissions person. I was the one who had to check out the backend when something wasn’t working, I posted all the content – I was everything.”

On the other hand, Baker is still delighted by filmmaking. Though she directed her last series – season two of Hashtag – less than six months ago, she feels like it’s been too long. “Isn’t that just ridiculous?” she laughs. Luckily, come February, Baker will likely return to the director’s seat to film Tello’s latest project. Though still untitled, the story will follow a ballerina who has to “slum it” at a queer, modern dance company after an injury takes her out of ballet. “This is her last chance as a dancer,” explains Baker. If everything goes as planned, the show will be out in late fall or early winter of 2015.

Over the next year, Baker hopes to really strengthen audience engagement on the site. “2014 was all about creating content and having a new piece up every Sunday,” she says. “That turned out to be absolutely exhausting and it stopped being fun. Plus, it didn’t seem to be super-important to our subscribers. That’s the cool thing about working with Jess and Julie – we’re all working to know more and then act on what we learn.” Now Tello is focusing on producing shows their subscribers want – hence the big 2015 plan.

“We’re interested in honoring our audience and subscribers outside of just letting them watch content. We’ve started to create this great community and now we’re really excited to figure out what that looks like and what that is.”

Like any small business, Tello has had its share of ups and downs – but that said, it is now headed on an upward trajectory. Last year, Baker was finally able to hire Keck and King on as full-time staff, and she also attended the 2014 TEDWomen Conference as a lesbian filmmaker and a representative of Tello.

“It’s been really amazing. I used to look at the company and think how am I ever going to get to that level and be sustainable and viable?” she confides. “I would say persistence is the key. There were times when I got frustrated, but I didn’t give up and kept pushing through and, now, here we are.”

“I’d like people to know that, regardless of whether or not they subscribe to Tello,” she adds. “It’s important to support indie artists. If you notice something missing – it’s probably out there, being made by someone in the indie community.”