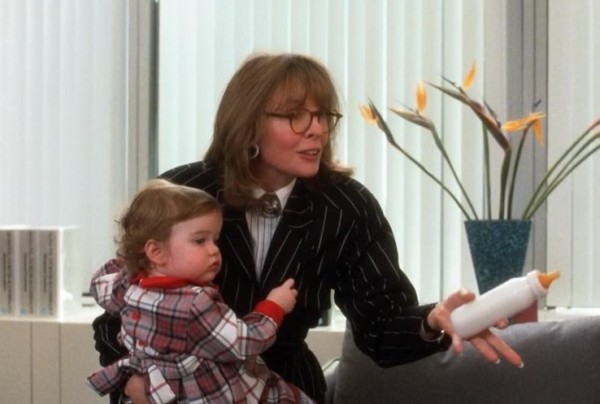 This Fashionable Fashion Entrepreneur is All About the Blazer

Mattel just might be the one responsible for shaping Lauren Wambold into the marketing and fashion entrepreneur she is today. At the ripe age of four, Wambold remembers spending hours agonizing over the layout of her Barbie Department Store. “It was one of my favorite toys,” she quips. “This – and watching my dad haggle with souvenir vendors while on vacation – really turned me into who I am today.” Of course, her background in Evolutionary Biology – and business school – might also have something to do with her career success. 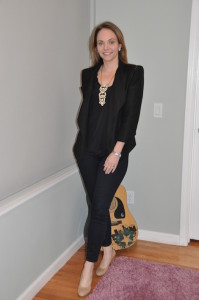 By day, Wambold is a sales and marketing consultant – primarily with The Dialog Group in Austin. Previously, she led Dell’s Consumer Go to Market Planning, a job she describes as the “ultimate brand manager for all Dell’s consumer products.” However, just last February, Wambold made the decision to leave Dell and the “traditional corporate path” for which she’s decided she was no longer cut out for. Though she’s been with Dialog for several months, the newlywed and stepmother of two, has been working on starting her own women’s fashion business in her spare time.

“I love my independence now,” says the strategist turned entrepreneur. “I love having a little business as a hobby. It’s like playing golf – I’m always trying to improve and beat myself.” In case the two jobs weren’t enough, Wambold also moonlights as a stylist for Stella & Dot, an online-based boutique accessories company. As a stylist, she hosts popup shops and trunk shows for those looking to buy jewelry in a less traditional environment. “I live with three boys – if you include my husband – so I need my girl time,” she jokes.

As a businesswoman so heavily influenced by fashion, it’s no wonder that Wambold can separate her “office” looks into two distinct categories: everyday business and client meetings. “The linking element is a blazer,” she explains. “I have tons of blazers.” While her staple piece is currently on trend, the blazer never truly goes out of style. In fact, Wambold believes that the blazer-adorned celebrities of her childhood had the biggest impact on her professional wardrobe.

“TV show characters like Angela Bower from Who’s the Boss, Maggie Malone from Growing Pains, and Claire Huxtable from The Cosby Show – they all wore blazes – big shoulder padded, long, colorful blazers,” says Wambold, crediting her mother for her introduction to television’s businesswomen of the eighties and nineties. “All my early influences of women who worked were from that time period. If I was a working mom in the eighties, I would have definitely padded up, hired Tony Danza, and hit the road every morning.”

Unfortunately, Wambold is a bit less enthused by Hollywood’s current landscape of career-minded women characters. “There have been some changes [in the way businesswomen have been portrayed onscreen]. If you are awesome like Amy, Tina, Ellen and Mindy – then yes. But, for the most part, we still see the same old same.” 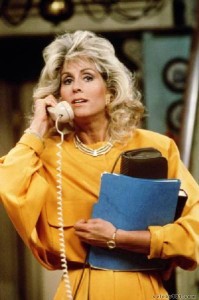 However, the one change Wambold has happily noticed is that the stigma of not being the perfect working-woman-wife-mom has finally faded. “I feel like there is an acceptance today that you will never have life balance. That you just have to drive the bus with stuff flying out the windows to the best of your ability, and that’s okay.” With that mindset, it’s no wonder that Diane Keaton’s 1987 film, Baby Boom, is still a favorite for Wambold. “J.C. Wyatt is my enterprenueress hero.”

But with all this talk of the eighties, let’s get one thing straight – Wambold’s fashion is much more timeless than dated. “I keep my look fresh with new jewelry – a cute necklace and earrings can really spice up my basic black staples and my don’t-tell-its-from-Target pieces.”

Luckily for Wambold, while many of the country’s fashionistas are trying to pit their fashion savvy against freezing blizzards, she’s based in Austin – safely outside the clutches of polar vortex weather. “Winter wardrobes are easy here since we only have one month of winter. I’ve been wearing the same winter blazers for three years.” However, for this Austinite, scarves are the major “winter” accessory. “I wear them all year because I am constantly cold. Even when it’s 100 degrees outside I still wear a scarf – it helps with the air conditioning indoors, and protects from the sun outdoors.”

So what tips does this strategy consultant turned fashion entrepreneur have to offer? For starters she says: “Tailor, tailor, tailor! Buy investment pieces like client-ready dresses, blazers, and skirts and have them taken in where you need it.” She also cautions against buying clothes that will need to be dry cleaned, repeatedly. “Inevitably, it will dirty, at the bottom of the dry-clean bag the morning you need it.”

For those of us who can wear jeans to work, Wambold also stresses the importance of knowing which jeans – brands, cuts, wash – look best on your body. In fact, she believes that when you find The Ones, it’s smartest to buy three pairs then and there. “I’m serious – three pairs – and you’ll wear them for three years.”

And last but not least, one final businesswoman pro tip: “For goodness sake, wear shoes you can walk in to the airport.”

17
TAGS:  dressing like the stars women entrepreneurs Women in entertainment